Galleries Videos CONTACT ADVERTISE
Famagusta 16°
clear sky
BUSINESS EDUCATION ENTERTAINMENT HEALTH POLITICS SCIENCE SPORTS TECHNOLOGY
10:58 Kratom Tea: How Is It?
11:46 Office Furniture Products for you!
12:17 Top Clubs, Their Value, Revenue And Current Standings
11:14 Reasons Why Rewarding Yourself is a Good Practice
10:56 What Egypt Has to Offer for US Travelers
12:48 How to Maximize Compensation in Your Personal Injury Case
12:28 How To Use a CBD Vape Pen for Anxiety
05:28 Second-Hand Vaping Is Harmless
05:15 Guide to Vaping and CBD Flower for Beginners
14:55 COVID-19 Recovered Ronaldo and Zlatan outshining everyone in Serie A
BIST
1325
GOLD
456.852
USD
7.8499
GPB
10.5095
EUR
9.4493
Breaking News
Tips & Trick To Buying Jewelry Items Without Spending Much
Close

The NBA is a star-driven league, always has been and always will be.Given that executive vice president John Paxson called Jimmy Butler a top-10 or top-12 player, it stands to reason the Bulls believe Butler is a star. But they also have discussed trading... 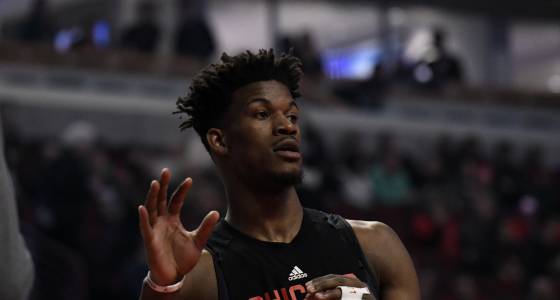 The NBA is a star-driven league, always has been and always will be.

Given that executive vice president John Paxson called Jimmy Butler a top-10 or top-12 player, it stands to reason the Bulls believe Butler is a star. But they also have discussed trading him both last June and this week. And Paxson wouldn't commit fully to building around Butler in the wake of Thursday's trade deadline, saying you "build with players, not around one."

That's why, on a Friday in which the Bulls began their post-Taj Gibson and post-Doug McDermott era against the Suns, Butler and Dwyane Wade weighed in on the franchise's direction.

Like Paxson knows from playing with Michael Jordan, Wade knows a little something about building around stars. He teamed with Shaquille O'Neal for one championship and helped orchestrate the Big Three in Miami to win two more with LeBron James and Chris Bosh.

"But I'm not in their position. I don't have the experience that Pax and (general manager) Gar (Forman) have. I never would say that they were wrong at all. Everyone has their own views on things."

Like most stars, Butler owns supreme confidence in his abilities to meet almost any challenge. And privately, he has tired of being questioned constantly if he can be the alpha on a championship team.

But perhaps mindful of being fined along with Wade the last time he spoke his mind to criticize teammates' commitment, Butler took the high road.

"No organization is the same. Everybody operates differently. Everybody has different personnel. I don't care if anybody wants to build around me. Just win," Butler said. "When you win, everything is fine whether you're built around or not built around. Everybody's happy. All of that is just background noise. I just want to win at all costs."

Butler reiterated his desire to remain in Chicago and, at least publicly, expressed faith in the front office.

"Right now this is the organization I'm going to be with, these are the guys I want to compete with, coaches I want to play for. That's all I can really focus on," Butler said. "When everything else comes up then we'll worry about that, but right now I ain't going anywhere baby."

Butler didn't worry much about the trade rumors. Sources said the Celtics added unknown protections on the 2017 first-round pick they own from the Nets in talks centered on Butler, so they never progressed.

"You can always be moved," Butler said. "C'mon, I enjoyed my (All-Star) break. So I'm in high spirits right now. Obviously, I miss my guys. It hasn't set in that they're my enemy now. But I think it will whenever we have to go against each other."

That's in reference to the departed Taj Gibson and Doug McDermott. But Butler is focused on what he can control, not whether he feels the front office is showing loyalty to him.

"I think I have one job to do and it's not to worry about whether someone is loyal or not. It's to go out there and hoop," Butler said. "I think they're going to put us in the best position possible to win games here. I think they're doing that. What they're doing is what they believe is right for this team. Our job is to make it work. Win games to the best or our ability. Loyalty, no loyalty, go out there and compete."

Wade has played for championship teams and those fully rebuilding. He admitted his unexpected arrival in free agency solidified management's current plan to remain competitive while re-tooling the roster to get younger and more athletic.

"I don't think they thought I'd be here. And I think their plan was to retool with the talent that was on the roster, put themselves in a position the following summer and in the draft to try to get better," Wade said. "Having me say I want to come here, it helped them say, 'OK, we can put a roster together that can compete and try to make the playoffs while also keeping our flexibility and not put ourselves out of position for our future.' I think that was the plan, and on April 12, we'll see if that plan came to fruition."

That's the day of the last regular-season game. And then, perhaps following a playoff run, Wade has a decision on his $23.8 million option.

"I haven't had that conversation about next season with (management)," Wade said. "Both sides wanted (the player option). I take my option seriously. I always look into what the best thing for me is.

"I don't want them to come to me and tell me what moves they're making and what the future is. I just want to play basketball and do my best job as a player."