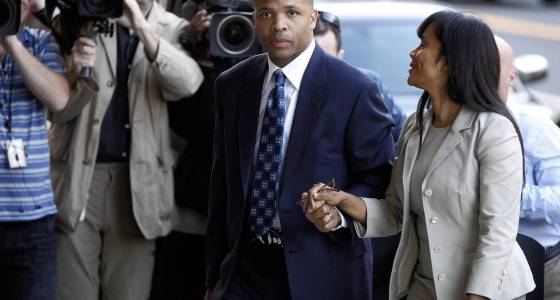 Craig Holman, of the watchdog group Public Citizen, said he found the fact Jackson receives about $138,000 a year from the federal government "troubling."

"The amount of money is breathtaking," said Holman, who for 40 years has examined government ethics and money in politics.

Jackson, 51, who got out of federal prison in 2015 after pleading guilty to looting his campaign fund, receives about $100,000 a year in tax-free workers' compensation benefits because he has bipolar disorder and depression, the Tribune reported.

Jackson's conditions have been worsened by his contentious divorce from former Chicago Ald. Sandi Jackson, according to his Chicago divorce attorney, Barry Schatz, who could not explain how Jackson's job as a congressman might have contributed to his issues.

"I can't imagine in any way that his bipolar disorder would have been caused in any way by his congressional duties," Holman said. "It's really troubling to see someone who goes to prison for corruption coming out of prison" collecting that much money from the government, he said.

Jackson, a Chicago Democrat, was in Congress for 17 years before quitting in 2012 amid an FBI probe that led to his conviction for misusing about $750,000 in campaign money. He spent the money on vacations, furs, celebrity memorabilia and other goods.

The federal workers' compensation program has sparked controversy, but reform efforts in recent years have stalled.

At a 2015 House hearing, Rep. Tim Walberg, R-Mich., expressed a concern that benefits were so generous they can "discourage an employee's return to work."

How Jesse Jackson Jr. collects $138,400 a year from the federal government Katherine Skiba

Records from former U.S. Rep. Jesse Jackson Jr.'s divorce case show how he has been able to collect hefty benefit checks from the federal government after serving time in prison for looting hundreds of thousands of dollars from his campaign fund.

Records from former U.S. Rep. Jesse Jackson Jr.'s divorce case show how he has been able to collect hefty benefit checks from the federal government after serving time in prison for looting hundreds of thousands of dollars from his campaign fund.

A labor department official at the hearing, however, said that while an annual average of 119,000 new injury and illness claims had been filed over the previous five years, recipients were getting benefits two years after their date of injury in less than 2 percent of those cases.

Jackson is considered temporarily totally disabled. In such cases, benefits are payable until it is determined an employee is no longer totally disabled. The checks can continue until the employee's death, although 15 states and the District of Columbia limit the duration of benefits, a 2016 Congressional Research Service report said.

In the year ending June 30, 2015, the federal workers' compensation program paid out $3.1 billion in benefits, the report said. Payouts included almost $1.9 billion in disability benefits, more than $1 billion in medical benefits and $156 million to the survivors of federal employees killed on the job.

The CRS report cited a 2013 study by the U.S. Postal Service Office of Inspector General, which found workers' compensation rolls included 10,240 postal workers aged 55 or older, including 1,892 who were 80 or older and two who were over 100.

One of Jackson's workers' compensation benefit statements emerged in the Washington, D.C., divorce case brought by his wife, who served prison time for failing to report much of Jesse Jackson Jr.'s haul on the couple's tax returns.

Labor department spokeswoman Amy Louviere and others at the department had no response to Holman's call for a probe of Jackson's benefits.