A new poll conducted by Quinnipiac University in Hamden, Connecticut, from April 12 to April 18 showed that a majority of registered voters in the United States thought the significant roles played by Ivanka Trump and her husband Jared Kushner at the... 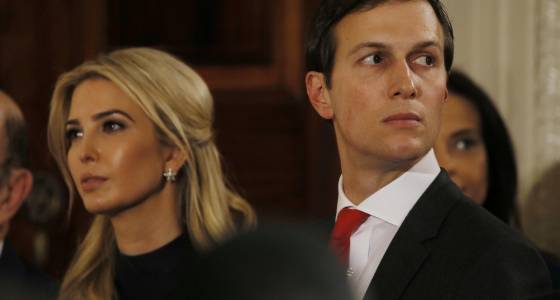 A new poll conducted by Quinnipiac University in Hamden, Connecticut, from April 12 to April 18 showed that a majority of registered voters in the United States thought the significant roles played by Ivanka Trump and her husband Jared Kushner at the White House were inappropriate.

The results of the survey were published Wednesday. The poll found that 36 percent said that the first daughter’s role in the White House was appropriate while 53 percent among the respondents said that it was not appropriate for Ivanka to be a top White House adviser.

When the respondents were asked about Kushner, 32 percent voted that it was appropriate for him to be playing a major role in the White House as the president’s senior adviser. However, 53 percent felt that it was inappropriate.

The poll also found how Americans reacted to President Donald Trump’s decision to launch an airstrike against Syria and also their opinions about Trump’s personal qualities.

"With only a slight bombing bump, President Donald Trump stays mired in miserable numbers. The first 100 days draw to a close with character flaws overwhelming his strongest traits, intelligence and strength as a person," said Tim Malloy, assistant director of the Quinnipiac University Poll.

The poll showed that 62 percent of the American voters said that the U.S. airstrike in Syria will not be fruitful in the future in order to prevent the Syrian government from using chemical weapons. However, 30 percent thought it would be effective.