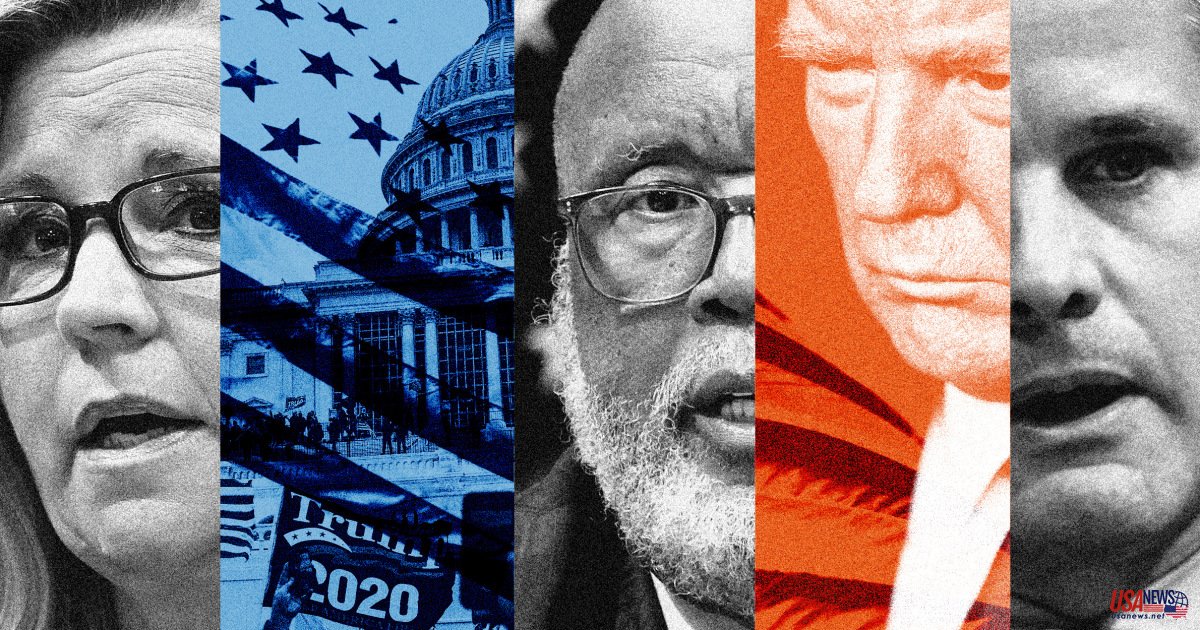 WASHINGTON -- Six down. There are at least two more.

Jan. 6 is the last leg of the public hearings phase in the historic, one-year-long investigation into the attack at the Capitol -- and American democracy.

The momentum built over a dozen hearings is expected to continue with two back-to-back panels this week by committee members. These meetings will be the final push for a House special panel. This special House panel was created to not only establish a record for history but also to show Donald Trump's involvement in the plot to reverse the 2020 election and warn the public of ongoing threats to the electoral system.

"I know they will make a very coherent concluding argument," stated Rep. Madeleine Dean (D-Pa.), who was held in the House chamber Jan. 6 and attended all hearings except one as an observer. A good trial lawyer will know that you need a clear opening and an arc, as well as a clear summary.

Dean stated in an interview that "I believe the facts are what power a summary -- you don’t have to add or decorate it." "The facts are so damning about the president who didn't care for people as high as the vice president, or as low as an election worker or volunteer, didn’t care about destroying lives and killing people in violence.

Tuesday's meeting will be focused on "marshaling the mob" by panel members. This includes evidence of coordination between Trump and his top aides and associates as well as white nationalist or militia groups such the Proud Boys, Oath Keepers, who members claim led the attack on the Capitol that day.

According to Rep. Stephanie Murphy (D-Fla.), who will be leading part of Tuesday's hearing, the committee will investigate how Trump's "pressure blends with the physical violence that his supporters committed at the Capitol," said Murphy.

On Thursday, the final hearing will take place. It will focus on Trump's actions or inactions as his vice president Mike Pence, Senate and House lawmakers and hundreds of officers were attacked. Dean stated that there were "187 minutes of people pleading with him for action and he did not."

The Thursday hearing will likely be televised at prime time. This is similar to the first hearing.

Panel members will try to connect all their threads of evidence -- that Trump and his aides launched an aggressive pressure campaign against Pence, Justice Department and state officials to engage with unconstitutional acts to overturn the election results.

They then resorted to brute power when their efforts failed: a deadly and violent attack on Congress Murphy described as a "last-ditch effort" on the 6th to alter the outcome of an election that was officially free and fair.

The fact that the hearing was centered around Trump is an indication of how important the 45th president, who is set to make a comeback in 2024, has been to the panel's vast investigation.

Trump tried to overturn the presidential elections. He tried to keep in office and prevent peaceful transfer of presidential powers," Rep. Liz Cheney (R-Wyo.), the top Republican on the Jan. 6 panel, stated in a speech at the Reagan Library.

He summoned a crowd to Washington. She said that he knew they had been armed on Jan. 6 and that they were angry. He directed the mob to march on Capitol to stop or delay the counting of electoral votes. He tried to join them. He refused to act to tell the rioters that they should leave when violence broke out.

Contrary to the Senate impeachment trials that took place shortly after the Capitol Riot, this time there won't be a vote in Congress to convict or exonerate Trump. The select committee also has no prosecutorial power.

There is fierce debate within the panel over whether Trump and his top lieutenants should be referred to the Justice Department. Cheney supports increasing pressure on DOJ.

The Jan. 6 panel will focus its attention on completing its comprehensive final report after the hearings are over. Chairman Bennie Thompson (D-Miss.) stated that the report could be made available to the public in September.

Thompson could schedule additional hearings in the summer or fall, if there is significant new evidence. After Cassidy Hutchinson (a former Trump White House aide) agreed to testify personally about conversations she had with her superiors in West Wing during the attack, the panel scheduled a surprise hearing in its July Fourth recess.

The 25-year old former aide explained in a bombshell testimony how Trump knew his supporters were dangerous and armed; that he was determined to join them there; that he didn’t care when he was informed about violence and that Pence was in danger.

Trump attempted to discredit Hutchinson, and dismissed the Jan.6 probe as a political witch-hunt.

In a major win for the Jan.6 committee, Cipollone agreed Friday to sit for a long, transcribed deposition that lasted hours. This was after months of negotiations. Given that he was close to Trump on Jan. 6, and was reportedly furious at his actions, Cipollone is in a position of verifying much of the evidence.

Sources said that Cipollone was a cooperative witness and that his interview video will likely be prominently shown during the final hearing.

The hearings have been a success by many measures. The committee provided new, detailed information on the plot to defeat Joe Biden's election win and keep Trump in office.

It's captured the attention of Americans with riveting live and recorded testimony from many Republicans who stood up against Trump and his aides. Nielsen reports that 13.7 million people watched Hutchinson's daytime hearing, nearly 30% more than the previous hearing.

The panel expects that TV ratings for the final hearing will surpass the approximately 20 million viewers who saw the first primetime hearing and the millions of others who viewed it via social media.

"What you've seen them do is close by with such strength on exactly the same thing the president knew and was involved in," Rep. Dean, vice chair of House Judiciary Committee said in the interview.