For years, the Leaning Tower of Pisa has been the biggest attractions in the Italian city of Pisa. However, that could change after officials approved the construction of a 165-foot Ferris wheel slated to begin during the summer. Pisa culture commissioner,... 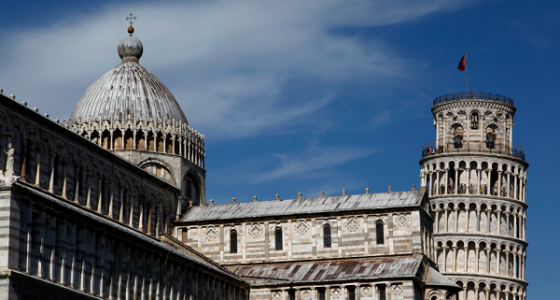 For years, the Leaning Tower of Pisa has been the biggest attractions in the Italian city of Pisa. However, that could change after officials approved the construction of a 165-foot Ferris wheel slated to begin during the summer. Pisa culture commissioner, Andrea Ferrante, told local media Sunday that the wheel will stand as tall as the Tower of Pisa and will be installed in what was once a parking lot overlooking the Mediterranean Sea.

Although the Ferris wheel project has only been approved for a three-month trial during the summer, city officials were hoping they can secure a good enough visitor turnout to keep the giant wheel spinning year-round. The project has aimed to draw in more visitors to Pisa, which was reportedly dwindling in tourism.

Aside from the Leaning Tower of Pisa, the Tuscan city was home to about 20 historic churches. There were also dozens of medieval palaces and bridges, most of which will more than likely be visible at the top of the new Ferris wheel.

"We can't keep getting by with the Leaning Tower alone," Pisa’s Heritage Councilor Salvatore Sanzo said to ANSA. “We must think of something different and a giant wheel could make the difference.”

The Leaning Tower of Pisa, which sits in Italy’s famous Piazza del Duomo, has drawn in roughly one million sightseers each year. Construction on the bell tower started in 1173, according to History.com, but the project was not completed until 1370. Because of the uneven foundation the tower was built upon, the nearly 200-feet tall Tower of Pisa started to lean not long after construction begun.  It was already leaning on a 1.47 degree angle by the time the project finished.

By 1990, which the Italian government approved renovation efforts on the building, the tower was leaning at a five degree angle. Following renovation, the Leaning Tower of Pisa reopened in 2011.