President Donald Trump’s travel ban hit another hurdle Friday as new evidence raised doubts over the executive order’s necessity. A report by the Department of Homeland Security (DHS), first obtained by the Associated Press, concluded that a person’s... 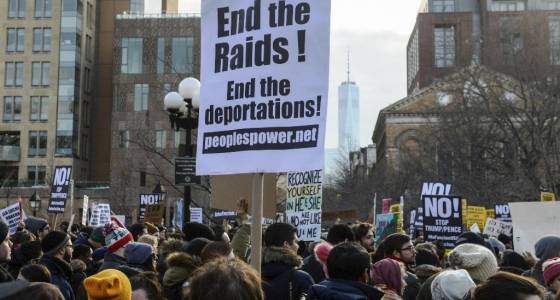 President Donald Trump’s travel ban hit another hurdle Friday as new evidence raised doubts over the executive order’s necessity. A report by the Department of Homeland Security (DHS), first obtained by the Associated Press, concluded that a person’s country of citizenship “is unlikely to be a reliable indicator of potential terrorist activity.”

The DHS study found that since the Syrian conflict in 2011, at least 82 individuals were convicted of terror-linked offenses. Of these, over 50 percent were native-born U.S. citizens, while foreign-born individuals came from over 20 different countries, with the top seven being Pakistan, Somalia, Bangladesh, Cuba, Ethiopia, Iraq and Uzbekistan.

Trump, after assuming office Jan. 20, imposed a temporary ban on people from seven Muslim-majority nations — Iraq, Iran, Libya, Somalia, Sudan, Syria and Yemen. He also indefinitely suspended the Syrian refugee program, citing terrorism as the primary concern. However, his executive order was challenged in court and effectively blocked by the Ninth Circuit Court of Appeals.

Trump, through his tweets, expressed concerns several times over the court’s order, and reiterated his claims on terrorism.

The report, which comes amid the court's order, did point out that terror groups in Iraq, Syria and Yemen pose a threat to the U.S., but it noted that groups in Iran, Libya, Somalia and Sudan are regionally focused.

Homeland Security spokeswoman Gillian Christensen said Friday the document was a work in progress, and not the final review of the government’s intelligence.

"While DHS was asked to draft a comprehensive report on this issue, the document you're referencing was commentary from a single intelligence source versus an official, robust document with thorough interagency sourcing," Christensen said, the AP reported. "The ... report does not include data from other intelligence community sources. It is incomplete."

The draft intelligence document can be accessed here.