Is the Oscar screwup an omen for Northwestern?

You know who won the Oscars?Jordan Horowitz, the producer of "La La Land," the movie that lost the Best Picture category, that’s who. Horowitz produced the classiest moment in the most excruciating of situations, a producer whose greatest hopes... 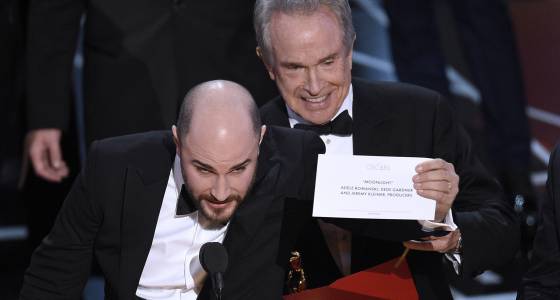 You know who won the Oscars?

Jordan Horowitz, the producer of "La La Land," the movie that lost the Best Picture category, that’s who.

Horowitz produced the classiest moment in the most excruciating of situations, a producer whose greatest hopes were dashed because nobody could give the right people the right envelope.

After hearing his movie’s name called and after giving a winner’s speech that included a drive to make bolder movies featuring diversity, Horowitz left the stage, only to barge back to the mic to announce that "Moonlight" won.

"This is not a joke,"’ he said as he called "Moonlight’s" producers to the stage. He dramatically shoved at the camera the card that said "Moonlight," the card Warren Beatty and Faye Dunaway weren’t handed.

Horowitz said he would be proud to hand the statuettes to his "Moonlight"’ counterparts, and he did. While giving up a dream, Horowitz was the adult in a glitzy, self-absorbed room desperately in search of one.

So, what’s this laudatory praise of a movie guy doing in a sports blog? Besides the fact Horowitz showed leadership and poise that many coaches and managers could learn from, there’s this:

Horowitz graduated from Northwestern, he just experienced a moment that is so Northwestern, and if I’m basketball coach Chris Collins, I’m fearing the NCAA tournament selection show, especially if the guy unveiling the brackets is fellow Wildcat Beatty.