Last Sunday Chelsea Clinton, usually such a reticent public figure, took to Times Square with her 2-year-old daughter, Charlotte, to march in the Muslim solidarity rally.“Thank you to all who organized #IAmAMuslimToo today — Charlotte’s 1st protest... 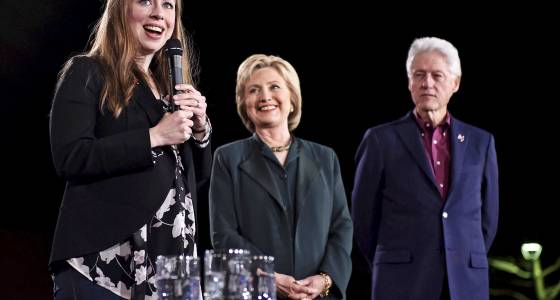 Last Sunday Chelsea Clinton, usually such a reticent public figure, took to Times Square with her 2-year-old daughter, Charlotte, to march in the Muslim solidarity rally.

“Thank you to all who organized #IAmAMuslimToo today — Charlotte’s 1st protest rally. #NoBanNoWallNoRaids,” she tweeted.

Chelsea’s also promoting her new, co-authored book “Governing Global Health,” with a soft-focus Q&A in the Sunday New York Times and an eight-city tour in April. It’s a more high-profile push than the one for her last, a 2015 YA book called “It’s Your World,” which focused on low-key school visits — exercising, perhaps, an abundance of caution during her mother’s presidential campaign.

This was, for decades, the Clinton strategy: Say as little as possible, avoid unforced errors. While stumping for her mother in 2008, Chelsea took it to new levels, refusing to answer this question: “Do you think your dad would be a good ‘first man’ in the White House?”

“I’m sorry, I don’t talk to the press and that applies to you, unfortunately,” Chelsea said. “Even though I think you’re cute.”

The interrogator? A 9-year-old “kid reporter” from Scholastic News.

Though her spokesperson denies it, signs point elsewhere.

“The super-aggressive tweets are a way to create a constituency around her,” says veteran political consultant Hank Sheinkopf. “Particularly in New York, where people don’t like Donald Trump.”

‘It bothers the s—t out of me that everyone thinks she’s the greatest thing since sliced bread.’

Last November, Page Six reported that Chelsea was being groomed for a Congressional run. The Clintons “will not give up,” a source said. “Chelsea would be the next extension of the Clinton brand.”

That’s the problem. Putting aside America’s exhaustion with dynastic politics, Chelsea herself, as a potential candidate, comes loaded with Clintonian baggage: the greed, the entitlement, and her mother’s greatest flaw — an inability to connect with common people.

Chelsea, like her mother, seems unruffled to the point of robotic function. Her new Twitter presence, electrifying compared to the Chelsea we’ve known since childhood, is really quite safe: What Democrat can’t get behind the social issues she’s promoting? It’s not like she’s tweeting about the two wars we’re still fighting or the Iran deal or TPP or whether the Fed should raise interest rates.

Still, it’s easy to see why some in the party may, on paper, see 36-year-old Chelsea as their next young star: Hyper-educated, married mother of two, scandal-free, torchbearer for a Democratic dynasty. But the Dems should consider how a Chelsea candidacy would play to the still-bruised Sanders cohort. Last Monday, the Washington Times reported that some attendees at a DNC forum in Baltimore were virulently “Never Chelsea.”

“Chelsea needs to go away,” 49-year-old Guinevere Boyd said. “She has nothing to offer. She has said some horrible, clueless things about progressives and progressive issues.”

“The country does not have any more appetite for the Clintons,” said Mike Bender, 61. “Enough is enough.”

Then there’s the general electorate. Trump won by speaking to the white working class, acknowledging their economic and cultural anxieties, assuring them that they would no longer be left behind. Hillary, defying even her husband’s advice, simply ignored them.

Through this prism, it’s hard to see how Chelsea Clinton reaches the average voter. She has never struggled for anything. She and her husband, hedge-funder Mark Mezvinsky, live in a $10.5 million apartment in the Flatiron District. Chelsea has held a series of vague high-paying jobs. She worked at McKinsey & Co., a consulting firm, then at Avenue Capital Group, a hedge fund. She was passionate about neither, and her accomplishments remain unknown.

“I wish that I had had one galvanizing ambition that I could reverse engineer my life toward,” she said in 2013.

One year later, she announced she was joining the family charity, which was then renamed the Bill, Hillary and Chelsea Clinton Foundation. On her Facebook page, Chelsea still lists herself as vice chair, though the foundation announced it was shutting down its Clinton Global Initiative last January amid financial corruption claims.

If anything, a Chelsea Clinton congressional run could most closely resemble Caroline Kennedy’s disastrous bid for Senate in 2008 — running, on the fumes of her father’s legacy, for the very seat Hillary had vacated to run for President.

Chelsea’s own tentative forays into public life haven’t gone well. In 2012, after decades of dodging the press, she decided she wanted to work as a broadcast journalist and met with all the major networks. Those meetings, according to Buzzfeed, were painful. One executive said that Chelsea and her team “acted like we should be grateful” that she was in the room. “There were ground rules,” said another executive, “what she could and couldn’t report, only good news.” They passed.

Chelsea eventually got a stint at NBC News, where she was paid $600,000 a year to conduct a few cringe-worthy interviews, the worst with the Geico Gecko. “Chelsea Clinton finds her level,” said The Baltimore Sun.

“This is my gracious challenge with her,” NBC producer Jay Kernis said in 2012. “People in television constantly interrupt each other. But when you are with Chelsea, you really need to allow her to finish. She is not used to being interrupted that way.”

Currently, Chelsea commands a speaking fee of $65,000 and earns hundreds of thousands annually sitting on various boards. Yet in 2014 she made one of the most tone-deaf comments of the decade, telling the UK Telegraph, “I was curious if I could care about [money] on some fundamental level, and I couldn’t.”

She wrote her own attack ad.

Among many Clintonworld staffers, Chelsea is regarded as an overeducated underachiever. “It bothers the s—t out of me that everyone thinks she’s the greatest thing since sliced bread,” one ex-associate told Daniel Halper, author of “Clinton Inc: The Audacious Rebuilding of a Political Machine.” “She’s never had a [real] job. She’s been in college for 12 years.”

Late last year, leaked emails from Bill Clinton’s longtime aide Doug Band underscored that sentiment. “She is acting like a spoiled brat kid who has nothing else to do but create issues … because she, as she has said, hasn’t found her way and has a lack of focus in her life.”

If Chelsea were to run, she’d most likely go after Nita Lowey’s seat in Westchester, where the Clintons live. Lowey, of course, is the lifelong Democrat who’d earned the shot for U.S. Senate in 2000 but stepped aside when Hillary decided to run. Should Chelsea muscle her way in, it would be a very Clintonian beginning — and the party itself should beware the now-Clintonian ending.