In Morocco, Blinken amid shifts in Mideast and NAfrica diplomacy

On Tuesday, U.S. Secretary Antony Blinken traveled to Morocco to discuss recent changes in the diplomatic dynamics in the Middle East/North Africa. This could help resolve some long-standing conflicts. 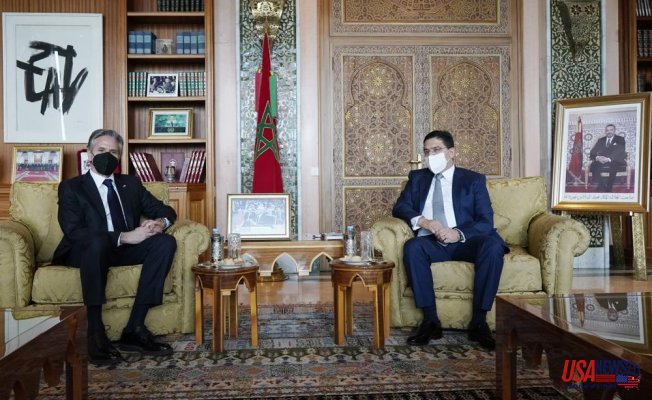 Blinken met with top Moroccan officials to discuss ways of expanding those ties, a day after a remarkable gathering in Israel's Negev Desert.

After new developments that offered new hope, but also added complications to the resolution of the dispute over Western Sahara, Blinken visited Morocco on Wednesday and Algeria again on Wednesday.

He will also visit Abu Dhabi's Crown Prince Mohammed bin Zayed, the de facto ruler in the United Arab Emirates. This is to help ease tensions between the U.S. and the UAE over the possible revival of the 2015 Iran nuclear agreement, as well as a recent spat about a visit by Bashar Assad to the Emirates.

Their second meeting in two days was the one between Blinken, and Nasser Bourita, Moroccan Foreign Minister. They met Monday in Sde Boker in Israel, where they both confirmed their commitments to support a revived Middle East and growing ties between Israel & Arab countries.

Along with Bahrain and the UAE, Morocco was among the countries that fully normalized relations with Israel in the Trump administration's push for the "Abraham Accords," where the U.S. promised significant support in return for such recognition. Although Morocco is not technically a signatory to the Abraham Accords, it was granted U.S. recognition in exchange for Israel's agreement.

The Biden administration, in rare endorsement of a Trump foreign-policy initiative, has pledged to support the Abraham Accords and to work to strengthen them. The administration has not reversed Trump's decision regarding Western Sahara. However, the administration has remained silent on the matter. U.S. plans for a consulate to be built in the territory were announced by Trump in 2020.

This has raised questions about Washington's support for Moroccan sovereignty over the ex-Spanish colony.

Spain changed its position on the territory last week by supporting Morocco's plan for Western Sahara to be independent as long as it is under Moroccan control. It called it the "most serious, realistic, and credible" approach to resolving the decades-old dispute.

Blinken repeated the phrase "serious and realistic" in his address to the Moroccan plan. However, he did not endorse it fully, but said that it was "one possible approach" to resolving this dispute.

Bourita stated that the autonomy plan was praised by many countries including Spain and the United States but that other countries, especially Europe, should also get on board. "We believe it's time Europe got out of the comfort zone where people support a process and shift to an outcome-oriented effort.

Rabat welcomed the Spanish decision immediately, and its ambassador to Madrid was re-instated after a 10-month absence. It was sharply criticised by Algeria, which supports the independence movement of Polisario Front in Western Sahara, and recall its ambassador to Spain.

Blinken met with both protagonists to discuss the possibility of a compromise on Western Sahara. This vast area, which Morocco annexed to Morocco in 1976, is largely deserted but rich in phosphates. It also has fertile Atlantic Ocean fishing areas.

The Polisario called Spain’s decision a "grave mistake" that gives Morocco leverage over control of migrants crossing into Europe. Madrid is accused of taking sides in a dispute, which the Spanish government has long maintained could only be resolved in a UN-sponsored referendum.