About 100 people marched Monday from uptown’s Marshall Park to a meeting of Charlotte City Council Monday, where they demanded that council members stand up for immigrants as reports of arrests continued.The protesters screamed at council members, many... 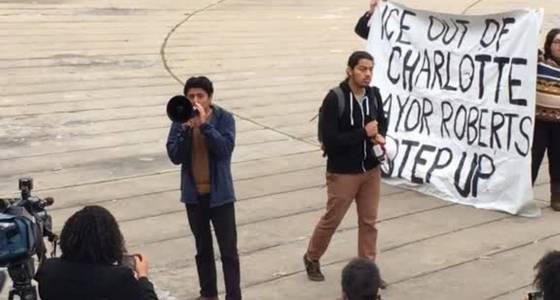 About 100 people marched Monday from uptown’s Marshall Park to a meeting of Charlotte City Council Monday, where they demanded that council members stand up for immigrants as reports of arrests continued.

The protesters screamed at council members, many of whom left the dais amidst chants of “No more ICE!” and “Do Something!” One protester was escorted out of the building by police.

The rage of protesters was similar to what was seen after the September shooting of Keith Scott. Some people cursed at council members. Others shouted at them, telling them to stop Immigration and Customs Enforcement officials.

One person shouted at city officials, “You have the power!” Another person asked, “What would you do in the Holocaust?”

Earlier Monday, the group marched behind a white banner: “ICE Out of Charlotte / Mayor Roberts Step Up.” Marchers stayed on the sidewalk beside Third Street and appeared to move without incident as they chanted “No more ICE!”

The immigrant-rights group Comunidad Colectiva, which organized the march, planned to ask city officials to:

▪ Require Charlotte-Mecklenburg Police to “use discretion” in dealing with undocumented immigrants.

“We’re trying to show City Council that (immigrant arrests) is an ongoing issue going on throughout the community and we need a stronger presence from City Council,” said Mayra Arteaga of Comunidad Colectiva. “Just to have members of our community and people who are directly affected speak and demand that we hear City Council’s support.

“This is going down Central Avenue, on Eastway; somebody got picked up today at 3 o’clock. This is really happening in Charlotte, a city made by immigrants.”

At the council meeting, people held signs saying “No 287g” and “ICE out of Charlotte.”

About 100 people marched Monday from Charlotte's Marshall Park to a City Council meeting to demand support for immigrants.

About 100 people marched Monday from Charlotte's Marshall Park to a City Council meeting to demand support for immigrants.