A prime-time address to Congress is the most-watched speech a president delivers. About 52.4 million tuned in for President Barack Obama's first address in 2009, more than for any other he delivered during his eight years in office. So when Donald Trump... 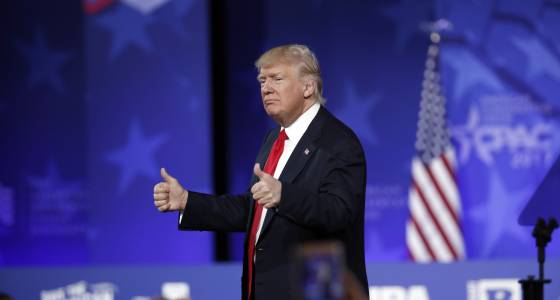 A prime-time address to Congress is the most-watched speech a president delivers. About 52.4 million tuned in for President Barack Obama's first address in 2009, more than for any other he delivered during his eight years in office. So when Donald Trump steps up to the rostrum of the House of Representatives for the first time on Tuesday night, he will address what could very well be the biggest audience of his entire term.

How will Trump use that once-in-a-presidency opportunity? He should use it to make the Democrats own their strategy of obstruction by reaching out his hand in a spirit of bipartisan cooperation — and daring them to refuse it.

Since Trump took office, Democrats have adopted a single theme: Resist! They have refused to support the majority of his Cabinet nominees, much less cooperate with him on any legislative priorities. This is the Democrats' Achilles’ heel. They are so blinded by hate that they cannot bring themselves to work with Trump even on the areas where they could forge agreement.

While this may make their base happy, it is only serving to further alienate millions of once-Democratic voters in middle America who abandoned the party in the last election. Of the nearly 700 counties that twice voted for Obama, The Washington Post reports, “a stunning one-third flipped to support Trump” in 2016. The strategy of obstruction is sending a message to these Obama-Trump voters that national Democrats did not get the message they sent in the 2016 election.

Trump should use his address on Tuesday to make this fact crystal clear for the American people. He should lay out a positive, hopeful vision for how he plans to “make America great again.” He should not shy away from the many areas where they will disagree but should point out that there are also many areas where they can work together to improve the lives of those forgotten Americans who sent him to Washington — and then challenge the seething Democrats before him to join him in that effort.

Trump should do so not out of some gauzy, false hope of reconciliation. Democrats are not interested in reconciliation. Rather, he should do it because it is tactically the smart thing to do. Trump should wrap the Democrats' hate around their necks and use it to drive a wedge between their party and the vast center of the country that feels the Democratic coastal elites no longer represent them. If Democrats wake up, stop resisting everything and start cutting deals, that's great. If not, let them pay a political price for it.

Trump should declare that he will repeal Obamacare, but he should also point out that the reason Obamacare failed was that it was pushed through Congress without any effort to win bipartisan support. He should say he wants to replace Obamacare with bipartisan reform that includes the best ideas from both parties. If Democrats refuse, it will expose the fact that they want Republicans to repeal Obamacare without a replacement so that they can win political points when the system collapses and millions lose their health-care coverage. Trump should call them on it by asking them to join him in a bipartisan effort to protect those Americans. Let the Democrats say no.

Trump should make clear that he can pass tax reform without Democrats but that it would be better for the country if they were to do it together. He should point out that there are many areas of bipartisan agreement with mainstream Democrats, invite them to work with him on a bipartisan plan — and tie it to his plan to spur $1 trillion in infrastructure investment over 10 years. Let Democrats say no.

Trump should ask Democrats to join him in a bipartisan effort to revitalize our inner cities. He should ask Democrats to work with him to increase funding for programs to train and assist local police, reform and strengthen the social safety net, improve educational opportunities by expanding vocational and technical education, and give poor parents the same right as wealthy parents to choose where to send their children to school. Let the Democrats say no.

Trump should ask Democrats to work with him to support working mothers by allowing Americans to deduct child care and elder care expenses from their taxes and by creating tax-free Dependent Care Savings Accounts with matching contributions for low-income families. Let the Democrats say no.

If Trump lays out a positive agenda and asks for Democrats support, it will put them in a bind. Their base will not countenance any cooperation that “legitimizes” Trump. But refusing to cooperate could backfire, especially for the 10 Senate Democrats who are fighting to retain their seats in states Trump won. But to do that, Trump must sound a hopeful, optimistic tone — something that, to date, he has declined to do.

If Democrats want to resist everything, fine — then make them resist bipartisanship.

Marc A. Thiessen is a fellow with the American Enterprise Institute and former chief speechwriter to President George W. Bush.

Can Donald Trump give a serious speech?

What President Trump should say on Tuesday night

Trump and Bannon are out for revenge