Sam Iida turned in a weekend to remember at the boys swimming and diving state meet at New Trier.The Glenbrook South senior entered his final high school tournament intending to make history and he didn't disappoint. With his scorching time of 1 minute,... 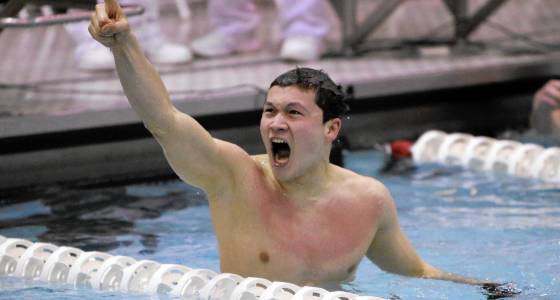 Sam Iida turned in a weekend to remember at the boys swimming and diving state meet at New Trier.

With his scorching time of 1 minute, 46.02 seconds, Iida won the state title in the 200-yard individual medley on Saturday and bettered the state record he had set the day before. Not only did he trim 1.25 seconds off his day-old mark, but he finished more than four seconds faster than the runner-up, Hersey junior Michael Petro.

"To go out like this is really nice," said Iida, a Glenview resident. "Just the atmosphere, the energy, the excitement – it couldn't get better."

Iida's day wasn't over yet, though, as he later claimed the second 500 freestyle crown in his prolific career. To do so, he had to hold off Peoria Notre Dame junior Colton Paulson, who beat Iida in the same race a year ago. Iida touched the wall in 4:23.63 on Saturday.

Iida's first feat came in Friday night's preliminaries when he set the state record in the 200 individual medley with a time of 1:47.27.

Check back later to read more about Iida's record-setting weekend.

Steve Reaven is a freelance reporter for Pioneer Press.