George W. Bush on Trump-Russia connections: 'We all need to have answers'

In the course of a rare interview on NBC’s “Today” show, former President George W. Bush -- who seldom commented on political issues throughout Barack Obama’s presidency -- supplied his critique of the Trump administration’s policies and the president's... 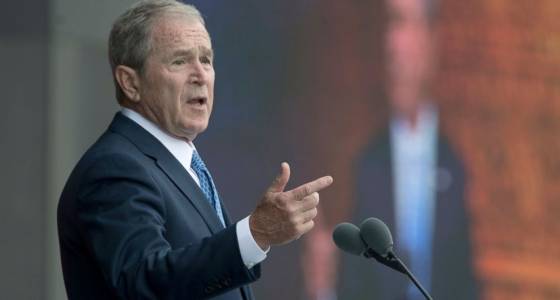 In the course of a rare interview on NBC’s “Today” show, former President George W. Bush -- who seldom commented on political issues throughout Barack Obama’s presidency -- supplied his critique of the Trump administration’s policies and the president's contentious connection with the press. The nation's 43rd president was on the show to market his new book, “Portraits of Courage,” a series of paintings of wounded veterans.

Here are the crucial highlights from his interview:

Bush mentioned he supports an investigation that explores attainable links among Russia and the Trump campaign.

“I assume we all have to have answers,” Bush told Matt Lauer.

Bush, having said that, did not say whether or not a particular prosecutor is necessary to conduct an investigation, rather leaning on any recommendation that comes from Senate Intelligence Chairman Sen. Richard Burr.

”I'm not positive the correct avenue to take. I am confident, although, that that query requirements to be answered,” he added.

Bush defends the media as a verify on "addictive" energy

Bush critiqued Trump’s feud with the media, calling it “indispensable to democracy.”

“Power can be incredibly addictive. And it can be corrosive. And it is important for the media to call to account individuals who abuse their energy.”

Bush said that through his time as president he tried to convince Russian President Vladimir Putin of the importance of an independent press.

When asked if the Trump administration’s executive order banning the immigration of people today from seven Muslim majority nations makes it tougher for the United States to fight terrorism, Bush replied, “It's tough to fight the war on terrorism if we're in retreat. And I feel we learned that lesson.”

“If the United States decides to pull out just before a free of charge society emerges, it is going to be tough to defeat them," he stated. "The enemy is very good about exploiting weakness. It really is going to be important. If that is the objective, to defeat ISIS, which I believe it ought to be, that we project strength. Now, no matter if or not the domestic politics plays helps them or not.”

When pressed by Lauer if he supports Trump’s ban, Bush wouldn’t give a definitive "yes" or ‘no.”

“I'm for an immigration policy that is welcoming and upholds the law,” he answered.

Bush reflects on the divisions facing the country

Bush laughed at Trump’s description of “carnage” across America but noted the divisions facing the nation.

“We had been fairly divided when I was president appropriate soon after a when. We had been united after 9/11,” he mentioned. “Some of this will burn out, but it requires all of us understanding how the other individual thinks.”

But as divided as the country could possibly seem, Bush pointed out that divisions were “much worse" in the course of the 1960s.

When asked how Trump can aid heal these divisions, he stated give the president some time.

“First of all, there is only been one month in office," Bush stated. "Secondly, I feel you have to take the man for his word that he desires to unify the country. We'll see if he's in a position to do so. It really is hard to unify the country with the news media getting so split up.”