For a Better Florida: Storm clouds ahead of 2017 legislative session

When Gov. Rick Scott steps to the rostrum Tuesday to open the 2017 session of the Florida Legislature, the moment will also signify something else: two decades of Republican control of the state Capitol.But this is no time for celebrating.Scott and his fellow... 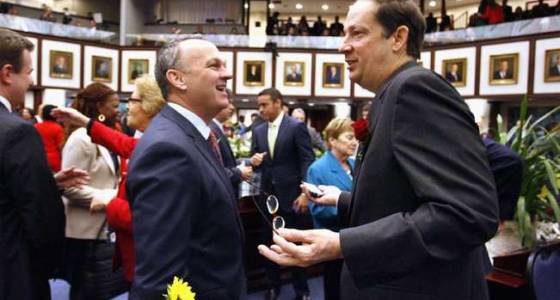 When Gov. Rick Scott steps to the rostrum Tuesday to open the 2017 session of the Florida Legislature, the moment will also signify something else: two decades of Republican control of the state Capitol.

But this is no time for celebrating.

Scott and his fellow Republicans are embroiled in an uncivil war as ugly as anything the state has seen in a long time.

It's a mean-spirited, marathon battle that could derail everyone's priorities in a session with a to-do list that includes a long-term land-buying plan to clean up the Everglades, expanding legalized medical marijuana, rewriting juvenile justice laws and fixing a flawed death penalty. That's in addition to the annual wrestling matches over guns, gambling, taxes and spending.

At the center of the storm are Scott and House speaker Richard Corcoran, a lawyer from Land O'Lakes.

Both men have abandoned direct communication in favor of media stunts. Corcoran calls out "corruption" in state government with publicly funded slash-and-burn videos. Scott blasts fellow Republicans with campaign-style robo-calls and a Facebook video that called Corcoran a "career politician."

On the surface, the clash between the speaker and the governor is over a narrow question of how much tax money the state should spend to attract jobs and tourists. But that accounts for less than one-tenth of 1 percent of the $82 billion state budget.

Scott has spent a lot of political capital defending Enterprise Florida and Visit Florida in the face of Corcoran's relentless criticism of both programs as wasteful and inefficient examples of "corporate welfare."

But this confrontation goes deeper.