Family devastated by deaths of 2 young relatives in fire

Jimmie Hampton was at work at Midway Airport when he got a call that the West Woodlawn building he owned was on fire, trapping his sister, his two nieces and their young children inside the basement.As he sped toward them on the expressway, he could see the... 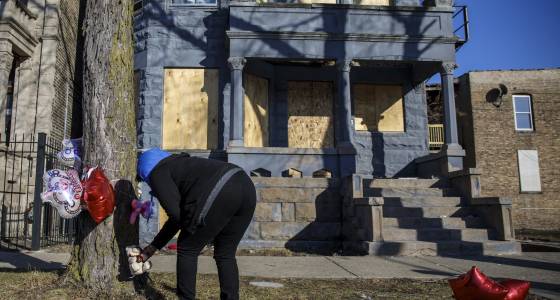 Jimmie Hampton was at work at Midway Airport when he got a call that the West Woodlawn building he owned was on fire, trapping his sister, his two nieces and their young children inside the basement.

As he sped toward them on the expressway, he could see the lights from the firetrucks and police vehicles.

"At the moment, I was just hoping that everybody was all right," Hampton said Sunday morning. "My mind was gone."

The "fast-spreading" fire Saturday night left an infant girl and a toddler girl dead, a 6-year-old boy critically hurt and three other people injured, including a Chicago firefighter.

The 6-year-old was taken to Comer Children's Hospital in critical condition. Two women, ages 48 and 25, were taken to University of Chicago Medical Center, according to police and fire officials.

Jimmie Hampton, 59, great-uncle to the two girls killed at the fatal fire on the 6600 block of South Champlain Avenue in Chicago, owns the home and five of his family members were there when the fire broke out.  Ziya Grace, 7 months-old, and her sister Jamaii Grace, 2 , died in the basement.  The other three people were transported to local hospitals.

Jimmie Hampton, 59, great-uncle to the two girls killed at the fatal fire on the 6600 block of South Champlain Avenue in Chicago, owns the home and five of his family members were there when the fire broke out.  Ziya Grace, 7 months-old, and her sister Jamaii Grace, 2 , died in the basement.  The other three people were transported to local hospitals.

Family members identified the hospitalized women as Hampton's sister and niece, Ernestine Franklin and Zakkiya Franklin, both of whom were being treated for smoke inhalation. Hampton said Zakkiya Franklin is the mother of Ziya and Samari.

Relatives said Ernestine and Zakkiya Franklin were burned going back into the home to try to get the children.

Family of the women and children gathered in the waiting room Sunday night praying the Franklins would recover.

At the University of Chicago Medical Center on Sunday night, Reginald Martin, 29, one of the girls' uncles, said he is heartbroken over their loss. His brother is the girls' father.

"Samari, her personality was really playful and joyful. Always smiling, always doing something. And she really loved her younger sister," said Martin, who sat with his chin in his hand as his wife rubbed his back for support. "And I'm just hurt that this happened. My prayers just go out to my brother. He's being really strong right now, he really is. It's difficult to lose basically like your family."

Hampton said his other niece, who was not hospitalized, is the mother of the little boy who suffered burns on 70 percent of his body and likely will need several operations.

The blaze began in the basement of a graystone in the 6600 block of South Champlain Avenue, where a stove had been turned on for heat, a law enforcement source said. No foul play is suspected.

Hampton, who lives on the first floor of the building, said someone was boiling water on the stove for the vapor.

"When the pot burned out, they were asleep, and the pot got so hot it popped," he said. "It flew somewhere and caught whatever on fire."

"Companies made an aggressive attack, trying to knock that fire down and make a simultaneous search for any victims that were in there," Carbone said.

The flames had quickly spread to the floor above, and firefighters went in "under very heavy fire conditions," said Carbone, who described the blaze as "fast-spreading."

Neighbors heard screaming and came out to see the building enveloped in an enormous blaze.

"I heard somebody hollering real loud," said Taneisha Grayson, 27, who lives across the street. "As I was coming to the corner, I heard everyone say there was babies in there."

A few neighbors tried to get inside, but the flames were too intense, Grayson said.

Grayson said she saw the boy's distraught mother collapse to the ground.

"She saw in the ambulance, and her baby was all burned up," Grayson said, waving her hand up and down her torso to show where the boy had been hurt.

Neighbors found some clothes and a blanket for the mother, who had rushed outside unprepared for the cold weather. She wasn't allowed in the ambulance with her son, so Grayson said she gave her a ride to Comer, then came back to the corner of 67th and Champlain.

An hour after the fire, there were tears on Grayson's face as she watched crews search the house through broken windows.

"As I approached and they said there was babies in there, I just lost it," she recalled.

Firefighters later found Ziya and Samari in the basement. They were pronounced dead on the scene.

One firefighter was injured in the course of the response. He was taken to an area hospital in fair to serious condition. Information about the nature of his injuries was not immediately available.

Hampton returned to the home Sunday morning, packing his white car to the brim with clothes, personal items and important documents, and taking photos of the damage for the insurance company. The windows were boarded up, and shards of glass covered the front steps.

Hampton said he had already been planning to sell the building, and this was "the straw that broke the camel's back."

"I'm just so devastated," he said.