After a full month of President Donald Trump’s leadership, we can see his foreign policy more clearly now: It’s clearly incoherent. But it could be worse.On one issue after another, Trump has disrupted U.S. diplomacy with incendiary statements — after... 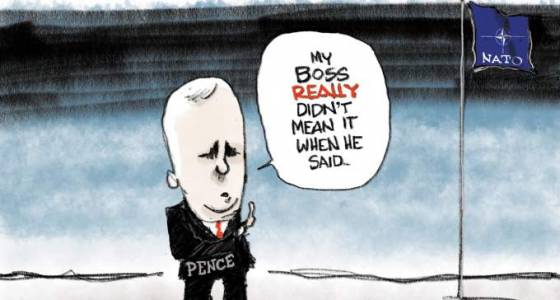 After a full month of President Donald Trump’s leadership, we can see his foreign policy more clearly now: It’s clearly incoherent. But it could be worse.

On one issue after another, Trump has disrupted U.S. diplomacy with incendiary statements — after which Vice President Mike Pence and other underlings have scurried around the world to tell other countries he didn’t really mean it. The recurring two-step has alarmed our allies, confused our adversaries and driven foreign policy wonks to despair.

Trump said he might lift sanctions imposed on Russia for its invasion of Ukraine; pay no attention, Pence said last week: “The United States will continue to hold Russia accountable.”

Trump has dismissed the NATO alliance as “obsolete” and suggested it’s no longer worth fighting for. Not really, Pence assured the allies: “The United States is expressing strong support for NATO.”

About Iraq, Trump said last month: “We should have kept the oil — but OK, maybe we’ll have another chance.” Belay that, said Defense Secretary James Mattis: “We’re not in Iraq to seize anybody’s oil.”

And on China, Trump announced that he wasn’t wedded to the “one China” policy that effectively recognizes Beijing’s ownership of Taiwan. But the president later reversed himself to China’s president.

Actually, “incoherent” is too mild. This is a bag of contradictions with no common thread beyond an impulse to throw old doctrines out the window to see what breaks.

That’s a problem for a superpower that still, on its better days, aspires to be a global leader. It’s hard to maintain strong alliances when your most consistent message is that you’re no longer dependable.

On a more basic level, it will be hard to make America safe again if your own Cabinet can’t agree on basic strategy. To quote the late Yogi Berra: “If you don’t know where you are going, you might wind up someplace else.”

Every U.S. administration has internal debates. This one appears to have a clash of civilizations.

Inside the White House, the ideologists of Trump’s presidential campaign, Stephen K. Bannon and Stephen Miller, continue to stoke his disruptive impulses. Beyond that inner circle, emissaries from the establishment — Pence, Mattis and others — have labored to polish the rough edges.

Trump himself doesn’t seem to know what he thinks about some of these issues — probably because he never thought deeply (or, in some cases, at all) about them before.

That means the hardest job in Washington belongs to Lt. Gen. H.R. McMaster, the new national security adviser, whose mission is to be the honest broker among these contending forces.

Here’s the good news: In practice, Trump has erred on the side of caution.

He hasn’t lifted sanctions on Russia. He hasn’t ordered the U.S. Navy to attack an Iranian gunboat. He hasn’t moved the U.S. Embassy in Israel to Jerusalem, even though aides had the order ready on Inauguration Day. He hasn’t touched off a trade war with China — Favoribahis yet. (That could still happen.) His instincts are still hotheaded — but he has listened to Cabinet secretaries and members of Congress who have urged him to be careful.

The Trump doctrine may turn out to be: Watch what we don’t do, not what we say.