When does a protest go so far over the line that reasonable people should start protesting the protest?Possibly now. Wells Fargo has been targeted for destruction by people who are angry that the bank made some of the loans to finance the construction of... 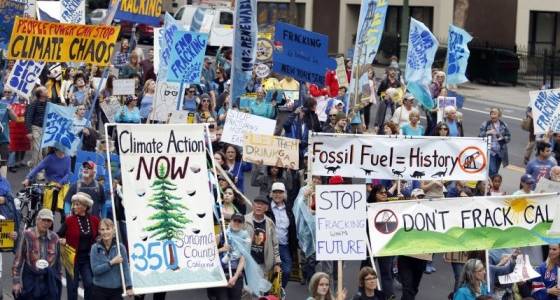 When does a protest go so far over the line that reasonable people should start protesting the protest?

Possibly now. Wells Fargo has been targeted for destruction by people who are angry that the bank made some of the loans to finance the construction of the Dakota Access Pipeline.

New York City Mayor Bill de Blasio sent a letter to Wells Fargo CEO Timothy Sloan to express “deep concern,” citing the threat of climate change, “negative environmental consequences,” and the “human and tribal rights of the Standing Rock Indian Reservation.” Three times in the letter he hinted at divesting some of the $165 billion in pension fund assets he controls for city employees.

The city council of Seattle has already voted to yank its $3 billion in annual cash flow away from Wells Fargo, and the city of Los Angeles is under pressure from a group called Revolution LA to cut all ties with the bank. Santa Monica, West Hollywood and Davis have already agreed to pull their money out. Similar actions are in the works in Alameda, in East Orange, N.J., and in Iowa City, Iowa.

No one in these cities needs energy, of course. They recharge their iPhones by plugging them into cow pies and waiting for lightning to strike.

This shouldn’t be a partisan argument. President Trump signed an order in January that restarted construction of the pipeline, but as recently as last fall, Hillary Clinton was unwilling to condemn the project, which labor unions support because it’s creating jobs.

If a job-creating domestic energy project is going to be put in the same category with South African apartheid and conflict diamonds, what else will require boycotts and divestiture in the name of politico-moral rectitude?

Maybe public pension funds won’t be allowed to invest in anything but the Ivanpah solar plant in the Mojave Desert. And even that may not qualify, seeing as it sets birds on fire during the day and runs on natural gas at night.

Meanwhile, California’s scorched-earth war with the Trump administration is heating up.

Thanks to a waiver from the U.S. government, California has been allowed to enforce more stringent standards than the rest of the country, but Trump’s new EPA administrator, Scott Pruitt, has indicated that he may not support the continuation of that waiver.

So lawmakers in Sacramento are rushing to lock in the Obama-era environmental rules by writing them into state law. A quick gut-and-amend of a blank budget bill created the new SB49, which would make the most stringent federal environmental rules the new “baseline” in California, prohibiting any changes to them even if the federal rules are later “undermined, amended or repealed.”

SB49 would also authorize any person acting in the public interest to file a lawsuit to enforce these “standards and requirements.”

The Delta smelt now have more lawyers than O.J. Simpson.

The problem here is that these politicians, in their pursuit of moral righteousness, are taking a vow of somebody else’s poverty.

If the public pension funds’ investment portfolios don’t perform up to expectations, taxpayers have to make up the difference. If energy and transportation costs go up when they could be going down, higher prices increase the cost of living and drive up the poverty rate.

The Census Bureau says the poverty rate in California, taking into account the cost of living, is 20.6 percent, the highest in the nation.

Where’s the moral outrage over that?

Susan Shelley is a columnist for the Southern California News Group. Reach her at Susan@SusanShelley.com and follow her on Twitter: @Susan_Shelley.