Doubting Rauner? We understand. Here's a reminder. Plus a Senate Pass/Fail.

When senators return to the Illinois Capitol on Tuesday, they'll have the place to themselves. The House is not scheduled to be in Springfield again until March 7.Perhaps the calm will focus minds and hearts. This might be the last chance for a budget compromise,... 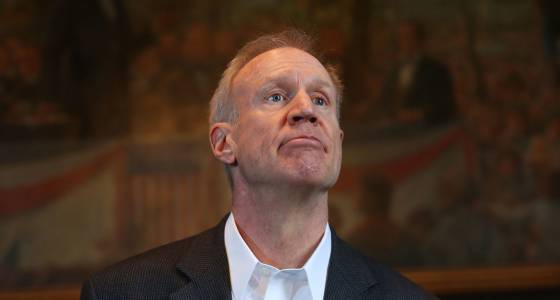 When senators return to the Illinois Capitol on Tuesday, they'll have the place to themselves. The House is not scheduled to be in Springfield again until March 7.

Perhaps the calm will focus minds and hearts. This might be the last chance for a budget compromise, now teetering toward collapse, to find its footing. Gov. Bruce Rauner has outlined what he'd like to see in a final deal. The compromise could end the budget standoff and include items on his agenda — freezing property taxes and passing pension reform. But it's unclear if his suggestions have been folded into the proposed deal's 12 bills.

It's been a rough month for Rauner. He got smacked by the left and the right for initially distancing himself from Senate negotiations. He stayed quiet lest his involvement derail the talks. Democrats didn't want to appear to be working with the controversial governor on his reform agenda. But Republicans didn't want to agree to a tax hike — one proposal in the package — without his backing.

Even Rauner's allies threw stones. The Illinois Policy Institute, a free market think tank, criticized Rauner for even encouraging the bargaining. The institute considers the Senate deal a sellout to Democrats who want higher taxes. So Rauner has stood largely alone. During his State of the State address in January and his budget speech in February, he avoided inflammatory oratory that would upset majority Democrats. Lawmakers knocked and mocked him anyway.

House Democrats greeted the governor during his budget address with signs on their desks that called his budget "fake news." They noisily punctuated his speech with laughter. They held news conferences before and after. From Chicago City Hall — Mayor Rahm Emanuel and Chicago Public Schools CEO Forrest Claypool — to newly sworn-in state Comptroller Susana Mendoza, the message was unified: Blame Rauner.

Emanuel ridiculed his budget as nonexistent. Claypool blamed him for a "racist" school funding formula. Mendoza skewered him for the state's unpaid bills. Dozens of Dem lawmakers issued ready-made statements denouncing him.

Some details didn't make it into Democratic messaging. Such as that Democrats have controlled the legislature since 2002. They could have prioritized pension payments, spent less, fixed the school formula and paid a bill backlog that has been accumulating for a decade.

So remember, as the Senate now ameliorates or magnifies the dysfunction, how Rauner has tried to break the gridlock.

He took office in January 2015 with 44 items on his Turnaround Agenda. He dropped most due to opposition and as gestures in compromise. He's open to a politically risky tax hike. Anything else?

He tried staying out of negotiations. He tried inserting himself. He tried tough talk. He tried gentle prodding.

He tried introducing his agenda in bill form: Scroll through all the bills in House rules, Speaker Michael Madigan's dead letter office, to find the pillars of that agenda. They've been ignored, along with Rauner's last two budgets.

What compromise or agenda have the Democrats offered? Not much in the House. Dems gave their speaker a 17th two-year term and received engraved clocks that read: "The Honorable Michael J. Madigan, Longest-serving House Speaker of a state House of Representatives in United States History."

Note what Rauner didn't do: Cave to that longest-serving speaker. Rauner won't write a blank check, via a tax hike, for Democrats without also getting pro-growth reforms to help build Illinois' tax base. That's what he ran on, what he continues to stand for.

The rabbit hole of Springfield is isolating and deep. We're confident if members of the Senate poke their heads out and take a serious look around, if they contemplate the reasons they ran for office, they'll conclude that cutting a deal to move Illinois forward is their duty.

If they can't or won't, they can all look in the mirror and admit that this time, what derailed the path forward was not Rauner or Madigan, but them.

Rauner: OK on Obama Day, but no one gets to skip work

A wake-up call for Illinois