Donald Trump's grand fantasy of what government can do

President Donald Trump’s first address to Congress was, by his standards, passably restrained and presidential. It had plenty of lines that evoked enthusiastic applause from congressional Republicans in the audience. All it was really missing was a respect... 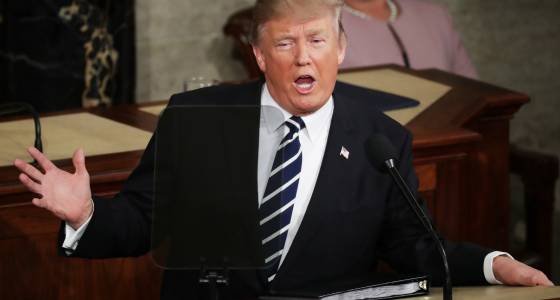 President Donald Trump’s first address to Congress was, by his standards, passably restrained and presidential. It had plenty of lines that evoked enthusiastic applause from congressional Republicans in the audience. All it was really missing was a respect for reality. No Republican president — or Democratic president — has ever been so extravagant in his vision of what the government can do.

He announced, “Our terrible drug epidemic will slow down and, ultimately, stop.” Referring to Islamic State, he said we will “extinguish this vile enemy from our planet.” Obamacare will be scrapped in favor of a new program that will “expand choice, increase access, lower costs, and at the same time, provide better health care.”

At times Trump sounded like the reincarnation of Lyndon Johnson. He said he would “make childcare accessible and affordable, to help ensure new parents have paid family leave, to invest in women's health, and to promote clean air and clear water, and to rebuild our military and our infrastructure.” Never mind that his own policies are an assault on clean air and water or that Republicans want to undermine women's health by defunding Planned Parenthood.

Nothing is beyond him. “Everything that is broken in our country can be fixed,” he said. “Every problem can be solved. And every hurting family can find healing, and hope.” If that weren't enough, “our children will grow up in a nation of miracles.” Did we elect a president or a messiah?

From this speech, you wouldn’t know that Republicans once emphasized the limits of government’s power to solve problems. Or that once upon a time — like, a year ago — they understood that every expenditure has to be paid for and has to be the best use of that money.

House Speaker Paul Ryan gushed over the speech until he was asked how it would all be paid for. At that point, he walked away without answering. But it's easy to guess: A bill will be sent to the taxpayers of the future.

The address brought to mind the sardonic observation of the French economist Frederic Bastiat: “Government is the great fiction, through which everybody endeavors to live at the expense of everybody else.” But then, Trump has never minded making use of a little fiction, or a lot.

Steve Chapman, a member of the Tribune Editorial Board, blogs at www.chicagotribune.com/chapman.

Donald Trump's populism is a charade

What Donald Trump can do to help Chicago