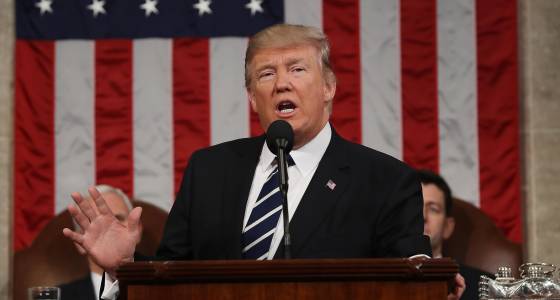 The CNN/ORC Poll, conducted February 28 among 509 Americans who watched Trump’s speech, found that almost 7-in-10 said that they felt that the country is moving in the right direction. President Trump's first address to Congress Tuesday also touched several policy subjects such as the economy, security, immigration, taxes and health care.

The CNN/ORC Poll revealed that Trump’s proposed policies on the economy and counterterrorism scored high (72 percent and 70 percent respectively) with respondents favoring them by saying that they "went in the right direction." Others policy initiatives such as policies on taxes (64 percent), immigration (62 percent) or health care (61 percent) were also received favorably.  The poll warns against a possible margin of error of plus or minus 4.5 percentage points.

Some political commentators also speculated a bump in the favorability ratings for President Trump following his speech.

“If I’m the Trump team I’m very, very happy with this speech,” David Axelrod, a political adviser to former President Barack Obama and a political commentator for CNN, said, according to the Hill.

“He went in there with a mind to reset and he wanted to illuminate this notion of chaos, he wanted to burnish those things he claimed as accomplishments and he wanted to get back to those basic themes and big goals that got him to where he is today,” he explained while predicting a marginal bump in the ratings.

“I think there will be an afterglow from this speech,” Axelrod continued. “He should get a bump in the polls, but I’ve learned in my own experience those things are fleeting and ultimately you’ve got to produce on the things you’re talking about or the memory of this speech will fade.”

The prospect of Trump’s speech earning him political dividends in the form of higher approval ratings was also suggested by Senate Majority Leader Mitch McConnell, R-Kentucky, who said: "Donald Trump did indeed become presidential tonight, and I think we'll see that reflected in a higher approval rating," according to CNN.

Trump began his first week in office with a 36 percent approval rating, the lowest for any new president. His overall average rating from over a dozen or so polls has since wavered at about 45 percent approving and 50 percent disapproving. Trump, however, responded by criticizing the reliability of approval ratings in January, calling them "phony" and "rigged."

Reacting to Sean Spicer’s tweet, many twitter users mocked him for sourcing the information about approval ratings from CNN because Trump has repeatedly discredited the news outlet by calling it "Fake News."