President Donald Trump was well on his way this week to cementing a presidential record for the least-approved first 100 days in American history.A poll released Sunday night by NBC News and the Wall Street Journal indicated Trump was continuing... 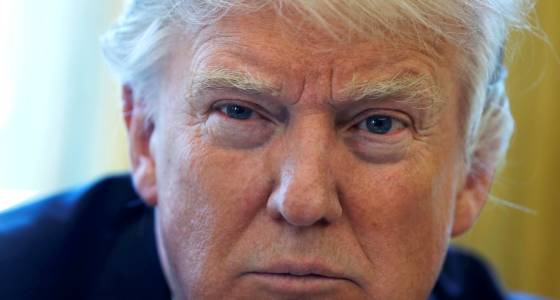 President Donald Trump was well on his way this week to cementing a presidential record for the least-approved first 100 days in American history.

A poll released Sunday night by NBC News and the Wall Street Journal indicated Trump was continuing to face the lowest approval ratings for any incoming president in recent years, with the majority of Americans disapproving of Trump's first few weeks on the job. About 48 percent of those surveyed said they viewed the president’s performance unfavorably, compared to 44 percent who approved of Trump’s first 100 days thus far.

The joint survey was conducted from Feb. 18-22 and surveyed 1,000 Americans across the United States. But its results weren't out of the ordinary: Trump’s approval ratings have continued to sink to new lows amid ongoing investigations into his presidential campaign's ties to Russian government operatives, as well as his continued Twitter spats with everyone from Sen. Bernie Sanders, I-V.t, to the national intelligence community's FBI and CIA.

Trump's first couple of weeks in office have also given way to a massive resistance effort, in part led by "Indivisible," a group working to disrupt GOP town halls in an effort to have their progressive views on issues like health care and financial regulation heard by elected Republican officials. Other polls released in recent weeks indicated the majority of Americans were "embarrassed" by their commander-in-chief, saying he wasn't level-headed and remained unconcerned with everyday Americans.

Trump, a well-known fan of good ratings, has repeatedly dismissed demonstrators organizing across the country and his plummeting approval as "paid protesters" and "fake news," likening his popularity to the election polls indicating former Democratic candidate Hillary Clinton would beat him in the 2016 presidential election.

"The so-called angry crowd in home districts of some Republicans are actually, in numerous cases, planned out by liberal activists," Trump tweeted Feb. 21. "Sad!"

Despite his administration’s attempts to curtail the media’s reporting on Trump’s ties to Russia, the president’s approval ratings seem to have also taken a hit by new developments in the ongoing scandal. Two days after Trump reportedly asked for the resignation of his national security advisor Mike Flynn — after the Department of Justice found he could be subject to Russian blackmail — Trump tweeted the entire story was simply untrue.

"This Russian connection [nonsense] is merely an attempt to [cover up] the many mistakes made in Hillary Clinton’s losing campaign," Trump tweeted Feb. 15.