Donald Trump and Bernie Sanders agree on one thing: America could become a one-party state

Many Americans have experience with one-party rule in their states. Much of the South is owned by the Republicans. Democrats have a stranglehold on California and the Northwest. But the country as a whole has always had a vigorous, competitive, two-party... 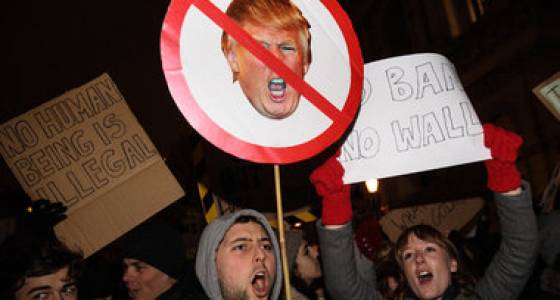 Many Americans have experience with one-party rule in their states. Much of the South is owned by the Republicans. Democrats have a stranglehold on California and the Northwest.

But the country as a whole has always had a vigorous, competitive, two-party system. This has been especially true in recent years. No party has held 60 seats in the U.S. Senate since the 1970s. The House of Representatives has flipped party control three times in the past 25 years.

But President Donald Trump, a Republican, believes this relative parity is waning -- fast. And he doesn't credit his political acumen for the new reality so much as Democratic House Minority Leader Nancy Pelosi's doltishness.

"I've been watching Nancy's statements and I think she's incompetent, actually," he said Tuesday on Fox News. "You know, if you look at what's been going on with the Democrats and the party, it's getting smaller and smaller. You know, in a certain way I hate to see it because I like a two-party system. We're soon going to have a one-party system. I actually think a two-party system is healthy and good."

President Trump may or may not like a two-party system, but it's undeniable that the Democratic Party's influence is in retreat. In the 1990s, former President Bill Clinton -- with Pelosi backing him -- remade the party of Franklin Roosevelt and Lyndon Johnson, moving it away from its working-class roots and embracing Wall Street and globalism. This spurred Clinton's success as the high-tech sector transformed the economy.

But it also may have undermined the Democrats' longer-term viability. Old-school Democrats, and now young progressive activists as well, see little difference between the Republican and Democratic parties. Passionate support for the Democratic Party has fallen among its core constituency. As a result, Republicans in recent years have outhustled Democrats on the local level, the training ground for U.S. House and Senate candidates, and aggressively used their renewed power in state legislatures to lock in national control through gerrymandering -- that is, the redrawing of congressional boundaries for purely partisan purposes. Many working-class, traditionally Democratic voters embraced Trump's anti-globalism, "America First" rhetoric, and Republicans now hold the White House and majorities in the House and Senate.

Vermont Sen. Bernie Sanders, an independent who ran for president in the Democratic primaries last year, says Democratic Party leaders need to rethink what it is to be a Democrat.

And if that doesn't happen? Some Democrats just might split off and form a new party. A CPAC online campaign calling for progressives to "Draft Bernie for a People's Party" insists such a party will "make sure our voices are heard." The campaign clarion call continues:

"We'll accomplish this goal not with the help of parties that have failed us countless times before, but with a new people's party. One that's sole purpose is representing the working class, the real majority of Americans."

Sanders probably won't join a People's Party, but the fact that some progressives would like to get one going shows the perilous state of the Democratic Party.

Right now, most liberal activists are focusing on making the Democratic Party the people's party. They hope a health-care-for-all, anti-Wall Street and anti-Trump wave will prove to be the powerful flip side to the conservative, small-government Tea Party movement that helped the Republicans retake the House in 2010 and put Trump in the White House this year.

Considering Trump's limited support in the country -- his 48 percent disapproval rating is unprecedentedly high for this early stage of a presidency -- such a movement could score big wins for Democrats across the country in the next election.

Or the opposite could happen, obliterating Democrats' Washington, D.C., contingent and turning the country into the one-party state Trump says he doesn't want to see. More Senate Democrats than Republicans face re-election in 2018, and many of them come from conservative states that voted for Trump in November.

Sen. Claire McCaskill, a Missouri Democrat who will seek a third term in office next year, acknowledged that progressives have a bead on her.

"I may have a primary because there is in our party now some of the same kind of enthusiasm at the base that the Republican Party had with the tea party," she said last week. "And many of those people are very impatient with me because they don't think I'm pure."