DOJ withdraws from portion of voter ID lawsuit in Texas

The Department of Justice has just dropped out of a portion of a voting rights lawsuit in Texas that could signal a shift in stance on the concern because Jeff Sessions was sworn in as lawyer common. The case at the heart of this most current legal drama... 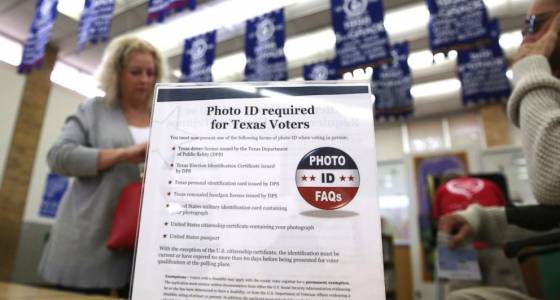 The Department of Justice has just dropped out of a portion of a voting rights lawsuit in Texas that could signal a shift in stance on the concern because Jeff Sessions was sworn in as lawyer common.

The case at the heart of this most current legal drama centers on voter identification laws that were place in place in Texas in 2011 that demand voters to have a single of seven forms of state-authorized ID -- gun permits are an acceptable form of ID, but college IDs are not. The law was controversial because voting rights groups -- and the DOJ beneath the Obama administration -- argued that the law discriminated against minorities who may possibly not have those types of ID.

Prior to today, the DOJ had been working with a quantity of voting rights advocacy groups, such as the Brennan Center for Justice, in bringing the suit against the state of Texas over the legality of the voter ID needs.

Now, even so, the DOJ has withdrawn from aspect of the lawsuit, according to a filing obtained by ABC News, and even even though the suit will carry on for the reason that of the other advocacy groups that are portion of the case, it is being seen as a attainable shift in policy.

"I have no purpose to think that this will influence the outcome of this case, but it is a disturbing signal from the Department of Justice," said Wendy Weiser, the director of the Brennan Center's democracy program.

Weiser elaborated on her comments, telling The Associated Press: "The much more vigorously the Department of Justice pursues illegal discrimination when it occurs, the extra deterrent an impact it has. When they pull back from vigorous enforcement, it may perhaps have an unfortunate and pernicious impact of sending a green light to states that there's going to be much less policing [of discriminatory laws]."

The district court ruled in favor of the DOJ and the plaintiffs on each counts, but the suit then went up to a circuit court on appeal. At that point, Weiser mentioned that the circuit court deemed that "yes, you win" on the initial element of the suit, but the court ruled that there would be "a do-more than" on the second portion with regards to the law's intent.

In today's filing, the DOJ withdrew from that remaining element of the suit that argues that the voter ID laws have been intentionally discriminatory.

In the filing, the DOJ mentioned it was dropping its claim that Texas' measure was crafted with the purpose of disenfranchising minority voters since state lawmakers are thinking of a proposal to revise the law. The Republican-backed bill would make permanent the court-ordered changes imposed for the November election, but its fate won't be known till closer to the end of Texas' legislative session in May possibly.

"Therefore, there is no basis for further judicial action at this juncture, when the State is 'acting to ameliorate the issues raised' in this case and has requested reasonable time to do so," the agency argued.

Justice Department spokesman Mark Abueg mentioned the agency was preparing a brief detailing its rationale for the move.

The case will continue with the other plaintiffs continuing to pursue the lawsuit. A hearing is scheduled for Tuesday.

"The Department of Justice, for a really long time, has been arguing that Texas intentionally discriminated, and has built a incredibly robust case," Weiser stated.

"There clearly has been a shift in the department's position and technique in the new administration. Beforehand, it was vigorously prosecuting the intent claim, and now it is stepping back from enforcing that claim, so there's a true worry that this could signal a retrenchment in voting rights enforcement by the Division of Justice and it is absolutely a retrenchment in this distinct case," she added.

The Related Press contributed to this report.