Mayor de Blasio’s endless drive to win respect as a national progressive leader hit another banana peel Saturday with the defeat of his candidate to chair the Democratic National Committee.The mayor had dramatically flown to Atlanta on Friday afternoon,... 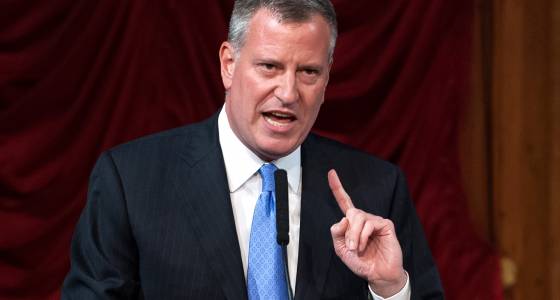 Mayor de Blasio’s endless drive to win respect as a national progressive leader hit another banana peel Saturday with the defeat of his candidate to chair the Democratic National Committee.

The mayor had dramatically flown to Atlanta on Friday afternoon, after his 4½-hour grilling by federal prosecutors probing the possible sale of City Hall favors, to rally support for Minnesota Rep. Keith Ellison.

The change-the-subject stunt annoyed some in the Ellison camp. As Mary Kay Linge and Aaron Short reported in Sunday’s Post, one Democratic source said Ellison allies had asked de Blasio not to come: “The buzz is, what the f–k was he doing here?”

After all, the mayor has built a rep not so much as a progressive leader but as a progressive opportunist. During the long Bernie Sanders-Hillary Clinton contest for the 2016 presidential nomination, he first tried (and failed) to play power broker, as with his unsuccessful efforts to make both candidates attend his own issues forum.

Behind the scenes, he was trying to get the Clinton camp to make him its point man with progressives as a condition of his support. In the end, he got nothing for holding out months after virtually every other New York elected Democrat had endorsed Clinton.

Perhaps de Blasio was looking to reconnect with the Bernie bros by going all-in for Ellison: Sanders and American Federation of Teachers chief Randi Weingarten were the two main speakers when Ellison announced for the job.

In a speech Friday night at a private party (he didn’t get a slot at the actual meeting), the mayor complained that people had come to see Democrats as “a party of lobbyists and consultants.” Funny: The mayor himself not only faces multiple probes into his relationship with lobbyists, he’s also in court fighting to keep the public from seeing his communications with lobbyist-consultants he declared to be secret “agents of the city.”

Perhaps the rest of the progressive movement has good reason for not wanting de Blasio as its leader.