Even after his sitdown Friday with prosecutors from the office of US Attorney Preet Bharara, Mayor de Blasio still hasn’t explained just how he’ll pay the lawyers representing him in multiple corruption probes.That is, whether his legal defense fund —... 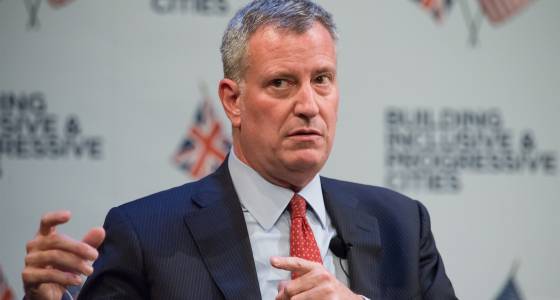 Even after his sitdown Friday with prosecutors from the office of US Attorney Preet Bharara, Mayor de Blasio still hasn’t explained just how he’ll pay the lawyers representing him in multiple corruption probes.

That is, whether his legal defense fund — which will cover his costs from investigations into the possible sale of City Hall favors to his donors — will take money from people doing business with the city.

Well, why not? His white-shoe law firm — which has yet to receive a penny from him despite nearly a year’s worth of legal work, essentially extending him a line of credit — itself lobbies city agencies on behalf of clients with business before the city.

Apparently, if Bill de Blasio does it, then it can’t possibly be suspicious.

Fact is, the mayor says he and his lawyers just haven’t decided how to set up his defense fund, so he’s not ruling anything out.

And while he pledges that he will “set a clear standard that is fair and avoids a conflict,” he won’t commit to getting a ruling from the Conflicts of Interest Board.

No surprise there: Back in 2009, when Councilwoman Debi Rose’s campaign was under investigation, she set up a legal defense fund and submitted it for COIB clearance.

According to Politico, the board’s unpublished ruling said she needed to operate under the same restrictions as an election campaign.

In de Blasio’s case, that would mean a maximum gift of $4,950 per person — but only $400 from anyone doing city business. And he’d have to publicly disclose the names of all donors.

Which may not be quite what the mayor had in mind.

Of course, he could let the city pay for his lawyers if he wanted to — his aides’ counsel has cost the public some $11.7 million already.

But de Blasio has decided already to go private, ostensibly to spare taxpayers the expense.

So city Comptroller Scott Stringer and good-government groups like NYPIRG are right when they say the mayor should get a ruling from the Conflicts of Interest Board.

That would be true in general, but it’s particularly called for now, given the focus of these investigations. Because the less Mayor de Blasio discloses, the more you have to wonder just what he has to hide.