Mayor de Blasio, two months into his reelection year, on Tuesday proposed a solution to New York City’s homelessness crisis: A 30 percent hike in the municipal shelter inventory.In football, this would be a Hail Mary pass — toss the ball way down field... 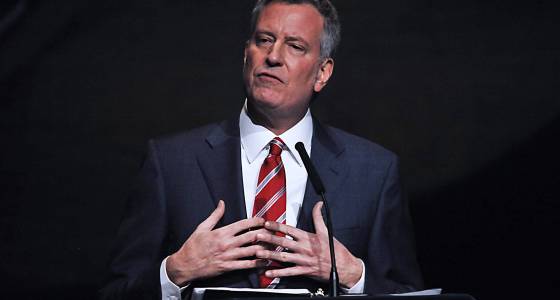 In football, this would be a Hail Mary pass — toss the ball way down field and pray that someone on your side catches it. In de Blasioland, it’s presumptive nonsense. Or, in the mayor’s own words, “a reimagined shelter strategy.”

But don’t expect a miracle catch. As de Blasio also said: “I’m going to be blunt with people about how long it’s going to take, and that we’re going to need community partners to help us do it.”

And then: “I, today, cannot see an end” to city homelessness.

Rough translation: Hey, I don’t believe it either.

No surprise. For not even the mayor, New York’s patron saint of rhetorical foolishness, can seriously propose cramming 90 new homeless shelters into city neighborhoods, beginning in a year when he is running for another term — and the entire City Council is on the ballot as well.

Because, really, didn’t City Hall learn anything from its Keystone Kops effort to shoehorn a permanent shelter into a Holiday Inn in Maspeth last year? That middle-class neighborhood exploded, and won.

So Tuesday’s announcement had to be less new policy in action than de Blasio cynicism on steroids. Which isn’t to deny that the city welfare-housing program is in crisis, or that things are getting worse, for both clearly are true. And it’s also not all de Blasio’s fault.

Since 1981, anyone who walks into a housing-intake office in New York has a presumptive right to city-funded shelter. Not everybody gets it — there are some eligibility rules — but free stuff always attracts takers, and thus the caseload trend line is always pointed up.

Yes, demand ebbs and flows with the sensibilities and philosophies of the mayor of the moment. It burgeoned under Mayors Ed Koch and David Dinkins, each of whom wrote liberal eligibility rules; it contracted under Rudy Giuliani, who demanded work in return for shelter; and then it began to drift upward again under Mike Bloomberg — who loosened the rules, but also ran head-on into spiraling housing costs.

Today, a record 60,000-plus live in city shelters — and that doesn’t count the thousands who haunt city streets. The mayor, who had promised to end homelessness outright during his first term, found that he couldn’t. And so he did his best to ignore it all, especially the street people.

But that didn’t work either, especially after The Post pointed out vagrants using the boulevard dividers along Broadway for toilets — in bright sunlight, no less!

It was then that he began talking about the problem — though not seriously — and so there he was again Tuesday in Lower Manhattan, delivering more bushwa.

Of the specific prescription — 90 new shelters — just forget it. If the first new shelter isn’t squeezed in on Fifth Avenue between 79th and 86th Streets, or thereabouts, it’s not going in anywhere.

After all, isn’t the City Council spooling up legislation to mandate the equitable geographic distribution of shelters and such? And if Maspeth can protect itself, you can bet that the Upper East Side can, too.

Unsurprisingly, the mayor didn’t talk about the (forgive the expression) true root cause of the current crisis — which would be himself, and his hand-picked, ideologically vetted welfare commissioner, Steven Banks.

Banks has spent the better part of his career in court attempting to pack as many people into the shelter system as sympathetic judges will allow. (Indeed, in 1980 he filed the suit that led to the city’s shelter entitlement.)

Thus, while the problem is well-understood — an obdurate combination of rising housing costs and pervasive social dysfunction — the crisis is ideologically driven and surprisingly simple to alleviate.

That is, the mayor needs to fire Banks and replace him with someone truly committed to diminishing the crisis, not exacerbating it. Easy-peazy.

Instead, de Blasio talked for an hour Tuesday without a word about how much his fantasy scheme will cost — and without critical response from the rest of the city’s political rogue’s gallery, which was to be expected.

And it may have been that the speech was timed to rest submerged, unnoticed, in the response to President Trump’s own address. For it certainly wasn’t designed actually to reduce homelessness in New York City. Nor will it do so.

Bob McManus is a contributing editor to the Manhattan Institute’s City Journal.