State and federal investigators Saturday continued to dig under a portion of a basement in a Joliet home in hopes of finding clues about the 1990 disappearance of a former Will County sheriff's deputy.Investigators from the Illinois State Police and the... 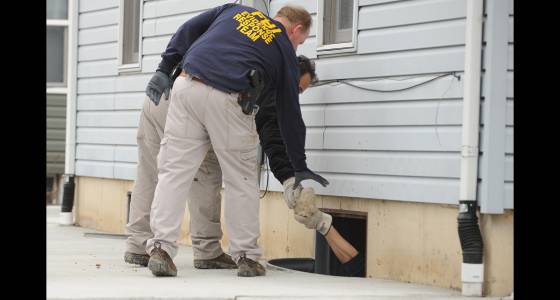 State and federal investigators Saturday continued to dig under a portion of a basement in a Joliet home in hopes of finding clues about the 1990 disappearance of a former Will County sheriff's deputy.

Investigators from the Illinois State Police and the FBI used jackhammers to break up concrete that was removed in buckets from the home in the 100 block of South Margaret Street on Joliet's west side.

Authorities said "new leads" led them to the basement of the home Thursday in connection with the October 1990 disappearance of Robin Abrams.

Before she disappeared, Abrams filed a civil rights lawsuit against a former Will County sheriff's official with whom she said she had had an affair. Abrams claimed in the suit that the official was responsible for her losing her job with the sheriff's office.

According to sheriff's department records, Abrams was hired on Jan. 11, 1988, and fired Dec. 21 of that same year, just three weeks before her probationary status was to end.

Abrams, who was 28 when she disappeared, was last seen Oct. 4, 1990, when she and her father, who was an Orland Park police officer, exchanged waves as their cars passed each other on a rural Will County road near Beecher. She was scheduled to testify in a deposition regarding the lawsuit nearly three weeks later.

Her 1989 red Dodge Daytona hatchback was recovered 11 hours later by police in Harvey. Her keys were still in the ignition inside the locked car.

Barb and Don Abrams, along with daughter Jody, hold photos of missing daughter Robin Abrams as they ask for help on Oct. 8, 1990 in Beecher.

Barb and Don Abrams, along with daughter Jody, hold photos of missing daughter Robin Abrams as they ask for help on Oct. 8, 1990 in Beecher.

Harvey police said at the time that a nearby resident saw the vehicle dropped off by two men in what was described as a tow truck.

Another resident reported that someone was trying to break into the car. In addition to the keys, police found Abrams' camera inside the car.

Three days later, a woman telephoned Abrams' father saying his daughter's purse was found three blocks away from the car's location. The missing woman's wallet and credit cards were gone, but her checkbook was still in the purse.

Illinois State Police Lt. Jeffrey Padilla on Thursday declined to say specifically why police were led to the home or what may have been found in the home, but noted that neither current nor former homeowners were involved in the case.

The home was built in 1990, the same year Abrams went missing, Padilla said.

"I'm in a state of shock," Abrams' sister, Jody Abrams Walsh, said outside the home Thursday.

Prosecutors with the Will County State's Attorney's office spoke with investigators on the scene Friday afternoon in a discussion that was described as "informational."

Alicia Fabbre is a freelance reporter for the Daily Southtown.