Chicago couldn't save A'Miracle. Can other babies be protected from bloodshed?

A baby girl named A'Miracle Jones died a few days ago, having never left the hospital.Back in September, Parasha Beard was sitting in a parked car in front of her mother's house in the South Chicago neighborhood when shots were fired from a passing car.... 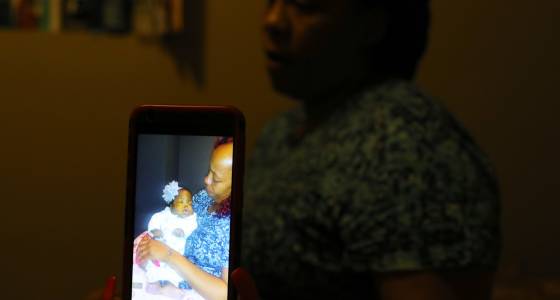 A baby girl named A'Miracle Jones died a few days ago, having never left the hospital.

Back in September, Parasha Beard was sitting in a parked car in front of her mother's house in the South Chicago neighborhood when shots were fired from a passing car. Beard was 19 and pregnant. She was struck in the neck by gunfire and killed. A man in the car also was hit. Surgeons were able to save the prematurely born infant, whom loving family members named A'Miracle.

There is more to A'Miracle's short life — how she was serenaded and read to in the hospital, how her anguished grandmother had one chance at the end to hold the baby free of life support tubes. But there is this unavoidable footnote: A'Miracle Jones' legacy as homicide victim No. 766 of 2016. She was born of violence in Chicago and died of that violence five months later.

It's the end of February and already there have been about 100 homicides, in line with last year's pace. Shootings are up: By the Tribune's count, at least 513 people shot this year, compared with 466 over the same time last year, when the final total of people shot in Chicago topped 4,300.

Recent homicide victims included another pregnant woman: Last Wednesday, a day in which seven people in Chicago were shot and killed — seven people! — Wilteeah Jones and her boyfriend, Malik Bingham, attended a family birthday party. A few hours later they were found shot to death in the Chatham neighborhood. Bingham had been shot in the neck while sitting in the driver's seat of a parked car. Jones, eight months pregnant, was found nearby on the sidewalk with wounds to the abdomen and side. The unborn baby, to be named Mileah, also died.

Many of Chicago's incidents of gun violence are connected to gangs in impoverished communities. The shootings relate to turf battles, retaliations and drug trafficking. Some victims are targeted, many others are hit by stray bullets. Men die in parked cars. Children are struck in playgrounds. Unborn babies die in the womb. The city is awash in illegal guns. It is chaos out there.

Yet the carnage often has predictable elements. For example, police said Bingham was a documented gang member with a score of 370 out of 500 on CPD's strategic subject list — an algorithm that uses past history to identify the people most likely to either shoot someone or become a victim. Police use the list in their work and to warn gang members they have a short window to change their ways, but not everyone listens. We don't know what Bingham may have been told.

A'Miracle Jones died Feb. 23, 2017, five months after her mother was killed in a Chicago shooting.

A'Miracle Jones died Feb. 23, 2017, five months after her mother was killed in a Chicago shooting.

The roots of violence, a tangle of economic and social factors, run generations deep; but that is not a reason to keep score and shrug. There is, for example, consequential action state lawmakers can take this spring to toughen criminal penalties against repeat gun offenders. We've written about this effort and want to see the General Assembly vote on a bill. We think this legislation would act as a deterrent for some criminals. But it also would save lives by keeping some others off the street for longer periods of time.

The scope of the city's tragedy is demoralizing. But Chicago can't give up.

Let A'Miracle Jones and the other victims be remembered, and let this legislation get passed.