I promised myself that I’d spend less less of 2017 dissecting the provocations of assorted jerks and frauds. I held out for a while. But as Milo Yiannopoulos’s reign as the latest conservative enfant terrible crumbled last weekend over video of him suggesting... 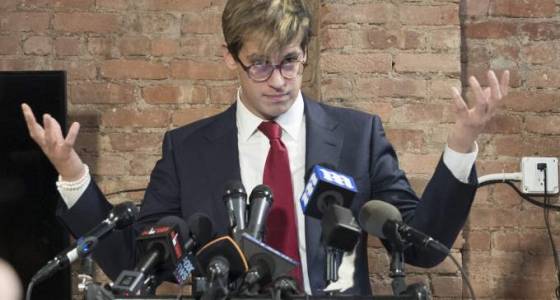 Utopianism can be a form of naivete. Given the sheer variety of students who gather on most college campuses, it would take an impractical — if not Orwellian — effort for administrators and faculty to anticipate their students’ every need. And given the inevitable contradictions between those needs and desires, it would be impossible to accommodate every single one of them. Hoping for a world free of economic precariousness, myriad forms of discrimination and the unkindnesses of youth may be impractical, given present political conditions and university politics. The solutions that the left and liberal college students propose may even be downright undesirable. But as forms of callowness go, wanting to improve the world is hardly the worst.

Contrast the wide-eyed earnestness of progressive college students, for which they’ve earned so much criticism, with the gullibility of their conservative peers, whose weakness for Yiannopoulos’s shtick was what inspired the American Conservative Union to say yes when Yiannopoulos asked to speak at CPAC.

In keeping with the broader themes of our political moment, Yiannopoulos is less a conservative than a fellow traveler who vexes liberals for profit.

Yiannopoulos’s embrace of the Gamergate backlash against the diversity movement in video games helped make him a media figure in the United States, but it seemed like a canny calculation rather than a genuine commitment. His outrageous statements about everything from Jewish control of the media to the Black Lives Matter movement to transgender people have long seemed less the product of a genuine worldview than a search for buttons to press, accompanying the jabs with naughty snickers. To regard him as genuinely politically conservative requires ignorance of conservative principles. To see his act as outrageous rather than derivative requires an unfamiliarity with subjects including art and gay history.

And yet, conservative college students were willing to keep booking Yiannopoulos, since demonstrating “that we are not these special snowflakes who need safe spaces,” as the organizer of one such event at Yale put it, apparently counts as high principle.

The tour stops themselves may not have been particularly profitable for Yiannopoulos. The production was deliberately over-the-top in a fashion intended to make a splash in an upcoming documentary. And Yiannopoulos on at least one occasion personally picked up the security fee a college was charging to maintain order at his appearance.