Californians fight for their beliefs and their prosperity

Like many of us, I’m a Californian because my mom and dad decided to head west in search of economic opportunity. Faults and all, there are few places on earth that can match California’s combination of climate, natural beauty, cultural diversity and... 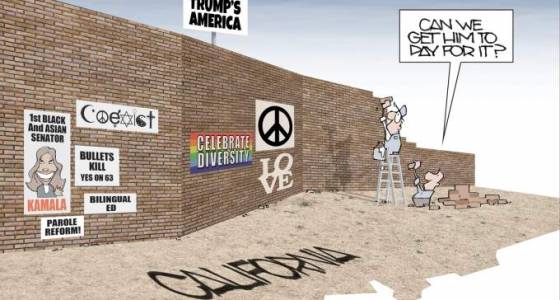 Like many of us, I’m a Californian because my mom and dad decided to head west in search of economic opportunity. Faults and all, there are few places on earth that can match California’s combination of climate, natural beauty, cultural diversity and economic advantage. I am forever grateful for the energy and ambition that fueled my parents’ determination to build a new life.

Am I proud to be a Californian? You bet.

If you’re like me, you have conservative friends who complain about the politics and the eccentricities of California. If only it could be more like Texas or Kansas … they say. What you also will notice about these friends is that they show no signs of picking up and moving to Texas or Kansas.

They like the quality of life they find here, and they like living and working in the sixth-largest economy on earth. France, Brazil, India, Italy or Russia? These are among the countries that hope someday to have an economy as large as the economy of California.

All over the state last week, communities were identifying ways to push back against the policies of the new president, Donald Trump.

Trump’s defenders who want California to lie down and accept the results of the election will be disappointed, but they shouldn’t be surprised. Democrat Hillary Clinton came close to doubling Trump’s vote count in California. He lost by more than 4.2 million votes.

Whatever your view of all of this, these are not subtle differences — and they are not just about progressive politics.

If you don’t think California’s major industries (technology, agriculture, and wine among others) would suffer under the changes proposed by the Trump administration, you need to pay more attention.

Do you think a trade war with China, the largest and fastest growing market on earth, would be good for California? Do you think the health care systems in your town would escape unharmed if they are required to assume responsibility for the 4.6 million Californians now covered by the Affordable Care Act?

In their view, a government devoted to environmental protection and workers’ rights is supposed to be bad for business.

But facts are stubborn things, as Ronald Reagan said. The most progressive state in the country also happens to be the most prosperous state. Somehow, Apple, Google, Facebook and countless other successful companies manage to do just fine. Meanwhile, one the largest agricultural economies in the world is powered by government-sponsored water projects.

From the Silicon Valley to the Central Valley, of course, immigration has remained one of the keys to success.

My home state has work to do. It wasn’t perfect when people imagined it was heaven on earth, and it surely isn’t perfect now. In 2017, housing is too expensive, and wages aren’t keeping pace with the cost of living. The structure of government and the tax laws are stuck in the past. And government labors under the weight of past decisions — from the under-funding of retirement benefits to the shortchanging of maintenance budgets for streets, highways and, yes, dams.