Famagusta 22°
clear sky
BUSINESS EDUCATION ENTERTAINMENT HEALTH POLITICS SCIENCE SPORTS TECHNOLOGY
06:57 Biden's focus on climate and families is trimmed to $2T plan
15:51 COVID-19 during pregnancy: Women regret not having the vaccine
03:35 US and Haiti demand release of 17 missionaries kidnapped by gang
16:24 It's risky business: Some Capitol Riot defendants give up lawyers
16:21 Kidnapping missionaries are being blamed on gangs with abducted past members
04:08 Officials label the fatal stabbing of a UK lawmaker terrorist act
00:00 The recalculation of unemployment benefit goes back to the Council of...
16:26 Jan. 6 panel sets vote on contempt charges against Bannon
00:00 Already survivor of a crash, an American fisherman survives after being...
13:59 As inflation rises, Social Security benefits get a big boost
BIST
1432.8
GOLD
528.64
USD
9.2085
GPB
12.7526
EUR
10.7441
Breaking News
A study shows that at 30 km/h we pollute more than at 50 km/h: Xavier Bertrand's misinterpretation
Close

In the hour before and after Kim Jong Nam was supposed to fly from Malaysia to Macau at 10 a.m. on Feb. 13, nearly 200 flights were scheduled to fly to or from Kuala Lumpur. Flights from nearby Singapore, more than a dozen. Arrivals from airports all over... 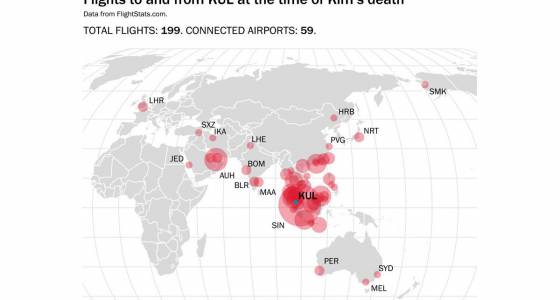 In the hour before and after Kim Jong Nam was supposed to fly from Malaysia to Macau at 10 a.m. on Feb. 13, nearly 200 flights were scheduled to fly to or from Kuala Lumpur. Flights from nearby Singapore, more than a dozen. Arrivals from airports all over Southeast Asia. Flights to Qatar, Australia, Japan and Taiwan. A flight from Alaska and two flights to London's Heathrow Airport. Some 200 flights moving thousands of people across the globe.

Kim didn't make his flight to Macau, of course. At some point before his plane departed, a young woman approached him from behind and apparently swiped his face with a cloth. That cloth - details are still murky - may have contained the nerve toxin VX, according to Malaysian authorities. Kim, the half brother of North Korean leader Kim Jong Un, died at Kuala Lumpur International Airport.

But consider all of the people getting ready for some of those 199 flights. Each of them was possibly within 100 yards of a rare, deadly nerve agent that might have made its way through the airport until the moment that it was swiped on Kim's face. Depending on how the VX got onto that cloth, and where, and how careful the assassins - two women, according to reports - were in applying and transporting it, that danger could remain.

Cindy Vestergaard is senior associate at the Stimson Center, a national security think tank in Washington, D.C. She spoke with us by phone Friday from Australia, where she is a visiting fellow at the Center for International Studies at the University of Sydney. (An Air Asia flight to Sydney left Kuala Lumpur at 9:10 a.m. local time the day Kim was killed.)

"VX is highly toxic. It just takes a drop, and that's it," she explained. "Unless you have an antidote, you're gone."

Vestergaard pointed out the obvious risk posed by an assassin carrying a cloth with VX through an airport.

"We watched her walk across one of the terminals. She would have had to have carried this cloth with her. Even if she had gloves on, it would have dispersed somehow, somewhere," she said. "Onto her, maybe onto someone else if she would have brushed against someone. If something would have dropped, onto a shoe, onto a suitcase." Wherever she doused the cloth might be contaminated, Vestergaard added. "Even to open the vial and carry a vial" risks contaminating the environment.

The toxin "can remain on material, equipment and terrain for long periods," the Organisation for the Prohibition of Chemical Weapons indicates on its website. "All nerve agents in pure state are colourless liquids. Their volatility varies widely. The consistency of VX may be likened to an involatile oil and is therefore classified as belonging to the group of persistent CW agents." A suitcase sitting on the tarmac in the rain could have a drop of VX washed off, for example, but in other places it could linger for some time.

Malaysia said Saturday that it would issue an arrest warrant for a North Korean diplomat if he refuses to cooperate with the investigation into the deadly attack on North Korean ruler Kim Jong Un's exiled half brother. The investigation has unleashed a serious diplomatic fight between Malaysia...

Malaysia said Saturday that it would issue an arrest warrant for a North Korean diplomat if he refuses to cooperate with the investigation into the deadly attack on North Korean ruler Kim Jong Un's exiled half brother. The investigation has unleashed a serious diplomatic fight between Malaysia...

It works quickly. "Its effect is mainly through direct contact with the skin," the OPCW indicates. Poisoning using a gas leads to a more rapid effect than through contact with the skin, because in the latter case it can take 20 to 30 minutes for the agent to reach deeper blood vessels. When it does, however, the effect is to essentially paralyze respiratory functions - the victim suffocates. Because persistent agents don't evaporate, it requires a smaller amount to kill. In the case of VX, the OPCW says, the amount of the agent required to have a fatal effect in 50 percent of victims is 10 milligrams.

An amount the size of three snowflakes. One-ninth of a grain of sand.

"I think the investigation now - if this is confirmed to be nerve agent - is going to be massive because it is in an airport," Vestergaard said. "You're going to have to track those people that were in that area. What planes were being checked in. You have to have a hotline, if anyone gets sick. All those people will have to be tested."

"If you have VX, you have a massive undertaking of an investigation happening now," she added.

Or so you'd think.

On Friday, the authority in charge of the airport released a statement indicating that there were "no anomalies" among those who sought medical care in the airport's clinic. What's more, Malaysia Airports said, the airport is cleaned six times a day and "the cleaning staff are in good health." That said, the terminal where Kim was murdered - KLIA2 - will be swept Saturday night for indicators of the presence of VX, according to Reuters.

Bear in mind that one of the women who was detained vomited while in police custody. It's not confirmed that she was suffering the effects of the agent, but it suggests that she may have been exposed to it - at the airport or somewhere else.

Speculation that the North Korean regime was behind the assassination is rampant, reinforced by the manner of the killing - and that the woman who put the cloth on Kim's face didn't herself die. That suggests to Vestergaard that she was well-prepared for her mission and that she may have had access to an antidote. Countering the effects of VX is a one-two punch, she said, combining atropine with pralidoxime chloride, an injection specifically designed to counter nerve agent poisoning. In the United States, the combination is packaged as a Mark-I kit that's issued to members of the military on occasions that they might face exposure to chemical weapons.

Another possibility, noted at Vice News, is that Kim died because of a combination of two chemicals applied to his face. Some reports indicate that one woman sprayed him with a substance and the other covered his face with the cloth - and it's possible that the combination of the two generated the VX compound. Possible - but unlikely. The OPCW details two compounds that can be combined to create VX, sulfur and O-ethyl O-2-diisopropylaminoethyl methylphosphonite. A more complex attack combining those two agents would again suggest a state actor - and indicate that the threat to the public (and the assassins) was lower than it would be if VX were used directly.

Asked whether she was surprised by the idea that Kim might have been killed with VX, Vestergaard said she was.

"Everything about this strikes me as incredulous and bizarre," she said - but so did the killing of Alexander Litvinenko, a former spy who was killed after being slowly poisoned with the radioactive compound polonium, she said. That someone was murdered in a public place in broad daylight, though, isn't a surprise. That's often how assassinations are conducted - including with the use of chemical weapons.

"In some respects, it's not surprising," she added. "With North Korea, the other thing that doesn't surprise me is that they want to be surprising."