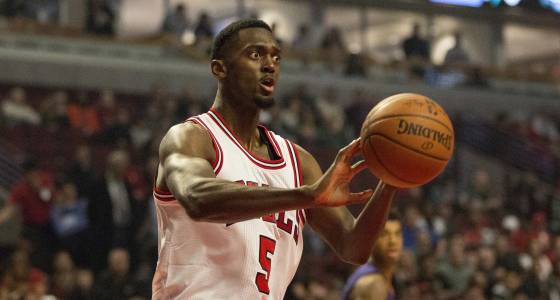 Early last season, when the third-person references came playfully and plentifully, Bobby Portis had a spirit and energy to him.

In a session with reporters after practice Monday at the Advocate Center, Portis used only one third-person reference, and it carried more of an edge to it.

"I don't really care about anybody judging me at this point," Portis said. "At the end of the day, I'm still going to be Bobby Portis."

To Portis' credit, he kept working and stayed ready. First, Mirotic suffered back spasms and missed three games, pushing Portis into the rotation as the backup power forward. Then the Bulls traded Gibson to the Thunder, making Portis the starter.

Coincidentally, Portis visited Gibson at his house two days before the trade, and Gibson preached his typical message of positivity.

"Taj was always saying, 'Always stay ready, BP, because around this league, crazy things happen,'" Portis said. "You know, crazy things happened for real, so it was just a crazy moment a couple days ago. Once Taj got traded, I sent him a big long thank-you for showing me the way."

That way has led to averages of 11.4 points and 5.4 rebounds in the five games since Portis has returned to the rotation, including two starts. It also has featured extended range from the position as Portis is shooting 37.5 percent from beyond the 3-point arc. Gibson's effective game, along with Robin Lopez, established an inside presence early.

"Our first and second groups are playing very similar," coach Fred Hoiberg said. "Before that, that first unit really had its own package. We ran a lot of ball screens with one of those two bigs coming in short and trying to roll into the pocket and play that way. And then that second group had more of a spacing dynamic to it with Niko and Bobby."

And though Portis tried to sell some communication issues for contributing to his inconsistent minutes, it's almost impossible to play five big men. And Portis' early play dropped him to fifth.

"I tried to communicate with him and let him know what he needed to continue to do, which is work," Hoiberg said. "Which Bobby always does."

That is well-documented. Portis is a frequent return visitor to the Advocate Center for after-hours workouts.

"One thing I always strive off of is being humble and hungry," Portis said. "That kept me sane."

So did long talks with his mom, an accomplished player in her own right, and his AAU coach.