A few weeks ago, Tom Cotton and David Perdue, Republican senators from Arkansas and Georgia, introduced an immigration bill that would cut the number of legal immigrants to this country each year in half, from about a million to about 500,000.In a news conference,... 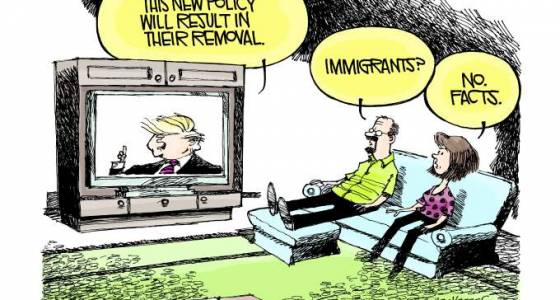 A few weeks ago, Tom Cotton and David Perdue, Republican senators from Arkansas and Georgia, introduced an immigration bill that would cut the number of legal immigrants to this country each year in half, from about a million to about 500,000.

In a news conference, Cotton offered a rationale for his bill. “There’s no denying this generationlong surge in low-skilled immigration has hurt blue-collar wages,” he said. If we can reduce the number of low-skill immigrants coming into the country, that will reduce the pool of labor, put upward pressure on wages and bring more Americans back into the labor force.

It seems like a plausible argument. That is, until you actually get out in the real world.

Cotton and Perdue’s position, which is now the mainstream Republican position, is based on the unconscious supposition that American society is like a lake, with a relatively fixed boundary. If you cut the supply of fish coming from outside, there will be more food for the ones born here.

The problem is that American society is actually more like a river. Sometimes the river is running high, with a lot of volume and flow, with lots of good stuff for everybody, and sometimes it’s running low.

Let’s illustrate the point by looking at one portion of the labor market. Right now construction is booming in many cities. This has created high demand for workers and pervasive labor shortages.

Nationwide, there are now about 200,000 unfilled construction jobs, according to the National Association of Home Builders. If America were as simple as a lake, builders would just raise wages, incomes would rise and the problem would be over.

But that hasn’t happened. Builders have gone recruiting in high schools and elsewhere, looking for people willing to learn building skills, but they’re not having much luck.

Construction is hard, many families demean physical labor and construction is highly cyclical. Hundreds of thousands of people lost construction jobs during the financial crisis and don’t want to come back. They want steadier work even at a lower salary.

Employers have apparently decided raising wages won’t work. Adjusting for inflation, wages are roughly where they were, at about $27 an hour on average in a place like Colorado. Instead, employers have had to cut back on output. One builder told Reuters that he could take on 10 percent more projects per year if he could find the crews.

In other words, the labor shortage hasn’t led to higher wages; it’s reduced and distorted the flow of the economic river. There’s less home buying, less furniture buying, less economic activity. People devote a larger share of their income to housing and less to everything else. When builders do have workers, they focus on high-end luxury homes, leaving affordable housing high and dry.

The essential point is that immigrants don’t take native jobs on any sort of one-to-one basis. They drive economic activity all the way down the river, creating new jobs in some areas and then pushing native workers into more complicated jobs in others.

A comprehensive study of non-European Union immigrants into Denmark between 1991 and 2008 found that immigrants did not push down wages but rather freed natives to do more pleasant work.