The Federal Communications announced Friday that it intends to block a privacy rule adopted by the commission last year that would require internet service providers to ask for permission before collecting sensitive information about customers.The Broadband... 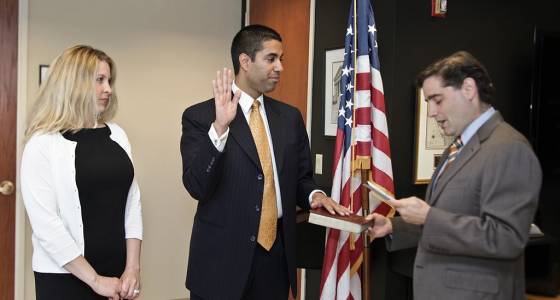 The Federal Communications announced Friday that it intends to block a privacy rule adopted by the commission last year that would require internet service providers to ask for permission before collecting sensitive information about customers.

The Broadband Consumer Privacy Rules, which were set to start to be implemented in March, defined sensitive information as information regarding a user’s finances, health, information from children, precise geolocation data, web browsing history and app usage history. It also includes any unencrypted message content that may be accessible to the service provider.

Any information that qualified under that definition would require customers to opt-in to allowing ISPs to collect the data. Information deemed to be non-sensitive can be collected by default requires an option to opt-out.

Internet service providers opposed the rule when it was passed in October 2016 and lobbied for the FCC to undo them.

Republican Senator Jeff Flake of Arizona also suggested the elimination the rules by using the Congressional Review Act (CRA), which allows Congress to undo rules set by federal agencies with a simple majority vote—and would essentially kill the rule for good by barring the agency that issued the rule from ever issuing it again.

The FCC’s apparent decision to stay the rule would avoid exposing it to the risk of permanent undoing from the CRA, but would also strip consumers of a protection that has yet to even be implemented.

The decision by chairman Ajit Pai—who took the lead of the commission by appointment from President Donald Trump—is not surprising, given his opposition to the rules at the time they were passed.

In October 2016, Pai dissented on the decision, explaining that the rule unfairly singles out internet service providers for their data collection practices while giving edge providers like Netflix and Amazon a pass.

“Those who have more insight into consumer behavior (edge providers) will be subject to more lenient regulation than those who have less insight (ISPs). This doesn’t make sense.” Pai wrote. “Nothing in these rules will stop edge providers from harvesting and monetizing your data, whether it’s the websites you visit or the YouTube videos you watch or the emails you send or the search terms you enter on any of your devices.”

At the time, Pai said if the FCC “truly believes that these new rules are necessary to protect consumer privacy,” then the government needs to make the rules uniform for all companies in the internet ecosystem and extend the regulation to edge providers.

As chairman with the ability to do just that, Pai has opted to create uniformity by rolling the rule for ISPs back rather than expanding it to edge providers.

“All actors in the online space should be subject to the same rules, and the federal government shouldn’t favor one set of companies over another,” the FCC’s statement on the issue said. The commission said the stay would help in “returning to a technology-neutral privacy framework for the online world.”

Chairman Pai is seeking votes on the stay by March 2—the date the rules are intended to go into effect. Given the 2-1 Republican majority on the board, and the fact Pai’s fellow chairman Michael O’Reilly also voted against the rule, it is likely the stay will pass.