Ever since Johnny Oduya went to the Stars in free agency after the 2015 Stanley Cup run, the Blackhawks have been searching for a defenseman to fill the role he played for them in those playoffs — a defensively dependable blue liner who could eat up 20-plus... 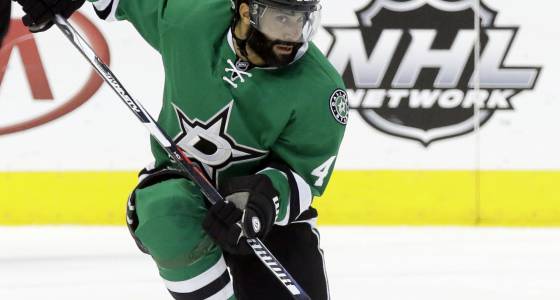 Ever since Johnny Oduya went to the Stars in free agency after the 2015 Stanley Cup run, the Blackhawks have been searching for a defenseman to fill the role he played for them in those playoffs — a defensively dependable blue liner who could eat up 20-plus minutes per night if coach Joel Quenneville asked.

After going through several candidates who didn't stick a season ago, the Hawks now are turning to … Johnny Oduya.

General manager Stan Bowman said he didn't envision the Hawks making a big splash before the Wednesday trade deadline, but he delivered a cannonball Tuesday in bringing back the 35-year-old defenseman who helped the Hawks win two Stanley Cups.

The deal came together quickly Tuesday night, a source said. On its face, the Hawks appear not to have surrendered much for Oduya, who will be an unrestricted free agent in the offseason. They traded forward prospect Mark McNeill, who was languishing in Rockford and never quite could crack the Hawks' roster, and a conditional fourth-round pick in the 2018 draft that could become a third-rounder if the Hawks win two playoff series this season and Oduya plays in 50 percent of the games.

To make the deal work for the salary-cap strapped Hawks, a source told the Tribune the Stars are responsible for half of Oduya's $3.75 million salary and cap hit.

The price for Oduya was likely lower than it otherwise would be because of injury issues Oduya has battled. Oduya missed much of the last month because of a nagging ankle injury, but he was healthy enough to return to the lineup Sunday against the Bruins and log 18 minutes, 28 seconds of ice time. Oduya also missed time in November and December and has played in just 37 games this season. He has one goal and six assists.

Stars general manager Jim Nill said the Hawks were one of several teams inquiring about Oduya over the last few weeks. He said Oduya is fully healthy now.

"Teams have been talking to me for quite a while," Nill said according to the official team website. "Even when he was injured, they wanted to know when he was coming back, was he going to come back? … (The Hawks) are comfortable with Johnny. They had him, won a Cup with him, they know what he brings, so they're a team that was always talking to us."

This isn't the first time the Hawks have traded for Oduya at the deadline to boost their Cup chances. In 2012, general manager Stan Bowman acquired Oduya from the Jets for second- and third-round picks in the 2013 draft.

Oduya helped the Hawks capture their second Cup of the decade in the lockout-shortened 2013 season.

In the 2015 playoffs, Oduya and fellow Swede Niklas Hjalmarsson were a formidable pairing in the Hawks' Cup run. (Ironically, the Hawks placed Hjalmarsson on injured reserve retroactive to Feb. 23 to make room for Oduya.) Quenneville relied mostly on four defensemen throughout the playoff run, a tactic that paid off.

But in the offseason the Hawks traded Patrick Sharp to the Stars and acquired defenseman Trevor Daley, whose salary was comparable to Oduya's instead of re-signing Oduya. Daley never quite fit with the Hawks. They traded him to the Penguins, where he thrived, in December 2015 for defenseman Rob Scuderi, whom the Hawks then traded at last season's deadline to the Kings for Christian Ehrhoff, who also did not work out. Perhaps last season would have been different if they had not traded for Daley and opted to re-sign Oduya.

The Hawks did bring aboard Brian Campbell for his second stint with the Hawks this season and Campbell has helped stabilize the Hawks' blue line, though Oduya offers more of a defensive presence than Campbell.

After Bowman made a trade Friday to acquire Tomas Jurco from the Red Wings, he said he was satisfied with the Hawks' depth on the blue line.

"We have a lot of defensemen and we've had guys who have played NHL games, in addition to the seven we have in Chicago," Bowman said. "I like the way that group looks right now."

Evidently, Bowman thought it could be better.