Blackhawks earn a few scars in 4-0 loss to Ducks

The bad blood was flying around the Honda Center on Thursday night, so perhaps it was a good thing coach Joel Quenneville rested several key players during the Blackhawks’ 4-0 loss to the Ducks.Jonathan Toews, Marian Hossa, Duncan Keith, Brent Seabrook... 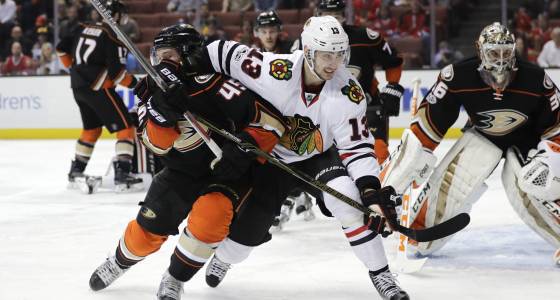 The bad blood was flying around the Honda Center on Thursday night, so perhaps it was a good thing coach Joel Quenneville rested several key players during the Blackhawks’ 4-0 loss to the Ducks.

Jonathan Toews, Marian Hossa, Duncan Keith, Brent Seabrook and Niklas Hjalmarsson got the night off, spared from the rough-and-tumble game that took place.

The animosity became palpable in the first period when Ducks winger Corey Perry slashed Ryan Hartman after a whistle. Hartman had hit Perry into the boards and Perry retaliated. Hartman exited the ice clutching his right arm but returned.

Hartman was wearing a splint on his right hand after the game, but he had a similar splint on after the morning skate.

“It’s part of hockey,” Hartman said of the slash. “It happens in chippy games. It’s a big hit. They do some of those things, but it’s just a part of hockey.”

Quenneville also didn’t seem to have much of a problem with Perry’s slash.

That was just the beginning of the roughhousing, and it ended with a pair of banged up Hawks.

During the third period, Nick Ritchie landed a punch on defenseman Michal Rozsival after Rozsival cross-checked Perry. Ritchie appeared to cut Rozsival, who is day to day because of an upper-body injury, Quenneville said. Andrew Desjardins suffered a lower-body injury.

Rookie John Hayden drew a roughing penalty when he got in a small scrap with Ducks defenseman Brandon Montour.

Between the scrums there was hockey. The Hawks sent 37 shots on John Gibson, but Gibson was up to the task.

Perry got the scoring started with a tic-tac-toe goal on a power play 6 minutes, 53 seconds in. He redirected a one-touch pass from Rickard Rakell for his 19th goal.

Quenneville challenged the play, alleging the Ducks were offside, but officials confirmed the goal upon review.

The Ducks added to their lead in the second period when Chris Wagner scored at 17:08, while the Hawks remained scoreless despite 18 shots on goal in the period. Ryan Kesler and Rakell each scored in the third to make it a rout.

“I thought for the most part a lot of guys had some good shifts and had chances to score,” winger Patrick Kane said. “It would’ve been nice to capitalize on a few. A couple tough breaks. Goalie made some good saves.”

Corey Crawford returned to the net for the Hawks and made 22 saves without his top three defensemen in front of him. Hjalmarsson remained in Chicago with his wife as they await the birth of their second child.

Despite being short-handed and having nothing to play for, Kane said the Hawks were disappointed with the result.

“For the most part we’ve got a lot of guys that are trying to fill playoff positions and trying to present themselves to coaches for a spot in the lineup.”