Fighting corruption is one of the fundamental principles of democracy. But what if it turns out that the embodiment of this democracy is involved in corruption deals? 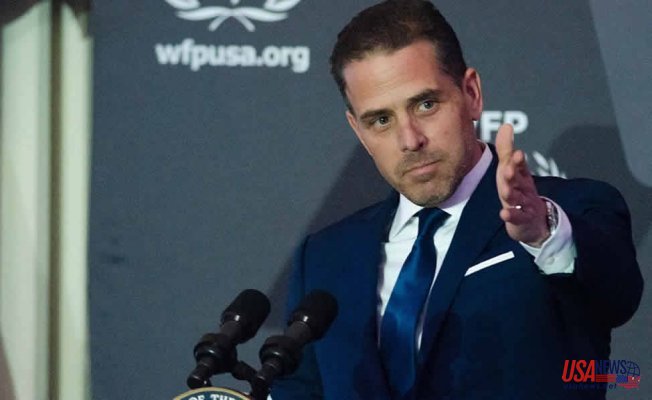 Fighting corruption is one of the fundamental principles of democracy. But what if it turns out that the embodiment of this democracy is involved in corruption deals? The election of the 46th President of the United States has shown that everyone has skeletons in the closet.

The newly elected US President Joe Biden has come a long way to the Oval Office. He did not just need to defeat Donald Trump. He had to justify to American voters that might have been aware of international corruption and involved in covering it up.

Burisma was established in Ukraine back in 2002. Consolidation of its assets took place in 2006-2007. And in 2015, it was considered the largest Ukrainian private natural gas production company.

It is headed by the former Minister of Ecology of Ukraine, Mykola Zlochevsky, who was deemed to be the richest Minister of the Government under the fugitive President Viktor Yanukovych.

In Ukraine, Zlochevsky is suspected of large-scale corruption. In June 2020, the National Anti-Corruption Bureau of Ukraine (NABU) and the Specialized Anti-Corruption Prosecutor's Office exposed three people who offered them $5 million in bribes. This money was to be handed over to the head of the Specialized Anti-Corruption Prosecutor's Office. He was expected to close the criminal proceedings on suspicion of the ex-minister, which were transferred in the fall of 2019 by the Prosecutor General's Office to NABU under the investigation which partially concerned Mykola Zlochevsky. This is the largest bribe case in the history of Ukraine.

In 2019, the former Minister of Ecology was also suspected of embezzlement of public funds.

Zlochevsky left Ukraine in 2014 – after the Revolution of Dignity, when the former Ukrainian President Viktor Yanukovych fleed to Russia.

The company’s press release stated that Hunter "will be in charge of the group’s legal department and the company's international promotion."

At the time, Joe Biden was vice president of the United States and had close contact with Ukraine's newly elected government after the Revolution of Dignity.

Experts believed that it could lead to a conflict of interest: on the one hand, Joe Biden is pressuring Ukraine to eradicate corruption, while his son receives money from a Ukrainian company, which is under criminal investigation in Ukraine.

“The Hill” news site had claimed that the Ukrainian Prosecutor General's Office under Viktor Shokin (who headed the Office from February 2015 to February 2016 – ed.) found that Burisma transferred more than $160,000 each month to Rosemont Seneca Partners, and that the company was related to Hunter Biden. However, the investigation was never completed. In 2016, Viktor Shokin was sacked.

In October 2020, it became known that in relation to a criminal case on the withdrawal of funds from Ukraine, Mykola Zlochevsky interrogated two witnesses, Latvian citizens. One of them claimed that they directly carried out operations to withdraw funds from Ukraine and coordinated their laundering with the help of Wirelogic Technology A.S. and Digitex Organization LLP with subsequent transfers to the aforementioned Rosemont Seneca Bohai LLC. According to the witnesses, they noticed that these companies began frequently transferring the same amounts, which led to questions.

“There is a recording of the conversation, directly between Poroshenko and Biden, where Poroshenko reports to Biden how he fired Shokin. And Biden listens very carefully to this information. In the end, he says, "very good". Poroshenko says that, even though there are no complaints about corruption or work against Shokin, “I followed your instructions … and resolved the issue of the Prosecutor General, received the statement from him,” reveals Derkach in the documentary that was recently presented at the Press Club Brussels Europe by British journalists.

In the documentary, the journalists present the documents that show the transfer of funds to offshore companies that may be related to Hunter Biden. They also say that the cases against Burisma in Ukraine led to the dismissal of top officials after a phone call from the US presidential administration.

Joe Biden himself did not hide that he demanded the dismissal of Shokin in exchange for $1 billion in loan guarantees of assistance to Ukraine: “And I went over, I guess, the 12th, 13th time to Kyiv. And I was supposed to announce that there was another billion-dollar loan guarantee. And I had gotten a commitment from Poroshenko and from Yatsenyuk that they would take action against the state prosecutor. And they didn’t … They were walking out to a press conference. I said, nah… we’re not going to give you the billion dollars. They said, ‘You have no authority. You’re not the president.’ … I said, call him. I said, I’m telling you, you’re not getting the billion dollars. I said, you’re not getting the billion. … I looked at them and said, ‘I’m leaving in six hours. If the prosecutor is not fired, you’re not getting the money.’ Well, son of a bitch. He got fired. And they put in place someone who was solid at the time.”

On May 25, 2021, Viktor Shokin presented his book, “Fictional Stories of Joe Biden's International Corruption in Ukraine, or Who Cannot Be the President of the United States.” In it, Shokin covers his investigations of the Burisma cases as Prosecutor General of Ukraine and the price he had to pay. It is also about the fact that the president-elect of the United States was well aware of what kind of company his son worked in.

Another Ukrainian official that was fired for his interest in the Burisma case is former Deputy Prosecutor General Kostiantyn Kulyk. In the documentary by British journalists, he explains why the company of ex-minister Mykola Zlochevsky, suspected of corruption, needed Hunter Biden: “In 2014, the United States of America imposed financial sanctions against former Ukrainian President Yanukovych and his entourage. All persons on this list tried to find lobbyists in the United States to resolve the issue with their sanctions. This included Kurchenko (a businessman with close ties to Yanukovych – ed.), Zlochevsky and other people. In 2019, when we went to confiscate $6.5 billion, and brought charges against Kurchenko, Zlochevsky, Lozhkin and others from Poroshenko's entourage (the current president at that moment – ed.), the US lobbyists managed to get me fired by holding competitions for compliance with the positions held by people who used to work for Zlochevsky. It is clear how they would assess my suitability for the role.”

After the dismissal of Viktor Shokin from the Prosecutor General's Office of Ukraine, Yuriy Lutsenko, close to the then President of Ukraine, was appointed the new Prosecutor General. Later, in an interview with The Hill, Lutsenko made a sensational statement: he was shocked when US Ambassador Marie Yovanovitch gave him a list of people who cannot be prosecuted, as such actions could harm the fight against corruption in Ukraine.

Later, in an interview with the Ukrainian newspaper Babel, Lutsenko clarified that the meeting with the Ambassador took place in January 2017. “The meeting was held at the Prosecutor General's Office of Ukraine, at this table in January 2017. She was not alone, and I was not alone. Ms. Yovanovitch was interested in the case of Vitaliy Kasko (prosecutor at the Prosecutor General's Office of Ukraine – ed.). Kasko registered his mother in his office apartment, even though she never left Lviv – such actions are considered as abuse of power”, Lutsenko said. According to him, Yovanovitch stated that Kasko is a prominent anti-corruption figure, and “such a criminal case would discredit anti-corruption activists.” “I laid out the details and explained that I could not open and close the proceedings at will. Then, I named several other so-called anti-corruption activists who were on trial. She said it was unacceptable, saying it would undermine trust in anti-corruption activists. I took a sheet of paper, wrote down the names, and said, “Tell me the list of untouchables.” She said, “No, you misunderstood me.” I said, “No, I understood everything. Previously, such lists were written on Bankova, and you present new lists from Tankova (former name of Sikorsky Street, where the US Embassy in Ukraine is located – ed.). The meeting ended. I'm afraid we didn’t leave on good terms,” he said.

Experts agree that US presidential administration’s “telephone law” towards the Ukrainian government could have undermined Petro Poroshenko's rating. That is one of the reasons why in the 2019 elections, he lost the presidential race to actor Volodymyr Zelensky, who stated at the debate that he would become “the judgment for Poroshenko.”

However, the situation with the Burisma case and the possible conflict of interest with the Biden family did not actually change during Zelensky's presidency. Moreover, his appointed Prosecutor General, Ruslan Riaboshapka, closed the case against Biden nearly on the second day after his appointment due to pressure on Ukrainian authorities.

During Petro Poroshenko's tenure, Riaboshapka was the deputy head of the National Agency for the Prevention of Corruption in Ukraine. It is one of the state structures, the creation of which was financed with the help of the USA. In turn, the platform on which the declarations of financial statements of Ukrainian officials are currently stored was developed by a company close to the Center for Combating Corruption, headed by Daria Kaleniuk and Vitaliy Shabunin. They do not hide that they carry out their work for grants from the United States and the George Soros foundation.

In April 2021, the son of the current US President, Hunter Biden, presented his own memoirs. In the book, he admits that he spent the money he earned on Burisma’s board of directors on drugs and alcohol.

“In the last five years alone, my two-decades-long marriage has dissolved, guns have been put in my face, and at one point I dropped clean off the grid, living in $59-a-night Super 8 motels off I-95 while scaring my family even more than myself,” Biden admits. The memoirs describe the US president's son's repeated rehabilitation attempts, his family's efforts to free him from addictions. He writes that he first drank alcohol at the age of 8 at a party in honor of his father's election.

The story of Burisma and the participation of Hunter Biden in it clearly shows that the current President of the United States knew exactly in which company his son works. Joe Biden is well versed in Ukrainian politics, so he couldn't help but know that Burisma is run by a former Ukrainian minister suspected of corruption.

The story of Burisma and Hunter Biden’s participation in it clearly shows that the current President of the United States knew exactly what kind of company his son works in. Joe Biden is well versed in Ukrainian politics, so he could not help but know that Burisma is run by a former Ukrainian minister suspected of corruption.

In February 2019, former FBI special agent Karen Greenaway, speaking at a hearing of the US Helsinki Commission, which took place in one of the buildings of the US Congress, expressed doubts that Ukraine will be able to return the money stolen by the Yanukovych regime. According to her, if this ever happens, it will not be the nine billion dollars that may have been expected before. And the more time passes, there is less hope of getting them back.

Mykola Zlochevsky became the richest minister during Yanukovych's tenure, so Hunter Biden's work in his company was well-known because he worked with people who stole millions of dollars.

Only time and impartiality of the law enforcement system, both in the United States and Ukraine, will ever unravel this tangle of corruption.