The arms race between mobile carriers continues to be waged. In its latest effort to undermine the competition, T-Mobile has announced a promotional offer that will score subscribers three lines with unlimited data for $100 per month.T-Mobile’s latest offer... 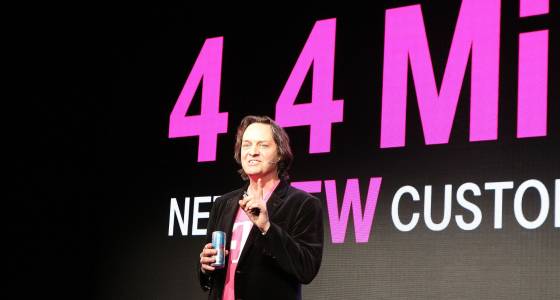 The arms race between mobile carriers continues to be waged. In its latest effort to undermine the competition, T-Mobile has announced a promotional offer that will score subscribers three lines with unlimited data for $100 per month.

T-Mobile’s latest offer is marketed by the company as gifting subscribers a free line on its network. The details aren’t quite as clear-cut as that, but it still will look like a win for customers when the bill comes.

Essentially, the deal grants a free third line to new T-Mobile customers or existing ones who already have two lines with the carrier.

T-Mobile suggests customers can use the line however they would like, whether it be getting another unlimited plan on T-Mobile One, using it to connect a tablet or smartwatch to the T-Mobile network, or set up a 4G LTE hotspot in a vehicle.

The deal can also be combined with T-Mobile’s current offer for its T-Mobile One plan that offers two lines for $100 per month. Essentially, through these two offers, customers will be able to get three lines with unlimited talk, text, and data on the T-Mobile network for $100 per month.

The offer, which will be available starting March 1, is only available for a limited time but those who get in on the offer while it’s available will be able to keep the free third line as long as the other two lines remain active.

The deal is designed to draw in new customers, and appears to be a direct response to the increasing competition T-Mobile is facing from other carriers—all of which have finally followed T-Mobile in offering unlimited data plans.

Sprint in particular managed to provide some competition for T-Mobile’s budget-friendly unlimited plans when it announced earlier this month a limited-time offer that gave users up to five lines for just $90 per month.