Berkeley is still appeasing the the anti-free-speech bullies

In the 1960s, students at Berkeley helped change the world by igniting the Free Speech Movement, a seminal moment in the history of 20th-century civil liberties. Fifty years later, Berkeley leftists seem to have decided that free speech was a mistake —... 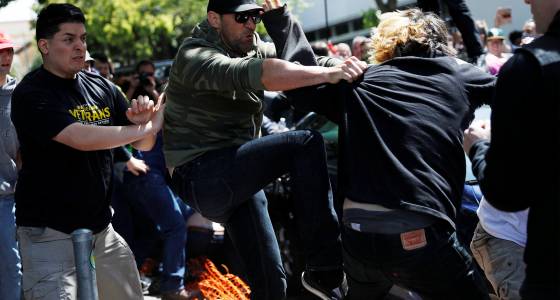 In the 1960s, students at Berkeley helped change the world by igniting the Free Speech Movement, a seminal moment in the history of 20th-century civil liberties. Fifty years later, Berkeley leftists seem to have decided that free speech was a mistake — and the administration seems intent on helping them roll it back.

You’ve already read about the riot that attended a speech by conservative stirpot Milo Yiannopoulos. You may have missed the destruction of College Republicans’ property, and the cancellation of a speech by conservative writer David Horowitz, after Berkeley officials told College Republicans that in order to provide adequate security, the speech would have to be held outside the middle of campus, and when many students are still in class.

Faced with similar demands when proposing to bring Ann Coulter to campus, BridgeUSA, a nonpartisan group, actually agreed to the terms — and the event was canceled anyway. Or maybe just postponed? The administration said it had not had adequate notice to provide adequate security.

(For now the event has been rescheduled to a later date, but administrators are insisting Coulter’s speech end before 3 p.m., because obviously if people are threatening violence, the solution is to give the speech at a time when few people can attend.)

Conservatives can be forgiven for a certain wary inkling that Berkeley’s concerns might be pretextual. So I reached out to Pranav Jandhyala of BridgeUSA to get his side. He provided me with the e-mail he sent to an administrator on March 17, nearly six weeks before the event scheduled for April 27.

In it, he informs the administration that his group is in talks to bring Ann Coulter to campus. The note says that there is a 50 percent chance she is coming, which should have been enough for the administration to at least begin exploring how to handle any security challenges.

Security challenges Berkeley does have, not only from its students, but from off-campus radicals, who Jandhyala believes were responsible for most of the violence at the Yiannopoulos event.

Keeping students safe is, of course, one of the most important jobs of a university. But so is exposing students to diverse viewpoints and supporting the sacred traditions of free speech. Berkeley seems to be willing to sacrifice the main point of an academic institution in order to ensure safety.

This might be excused if the school had proven more aggressive in exploring other options for dealing with the security risks. But as the Foundation for Individual Rights in Education notes, “possibly only one person has been charged in the Berkeley riots” — which suggests a certain unwillingness to deploy the traditional tactic of preventing violence. You know . . . arresting the perpetrators.

I can’t be the only one who suspects that the political leanings of those speakers deemed too risky are the reason the administration finds it more convenient to place the burden on the victims.

I’ve seen the letter administrators sent BridgeUSA, and it emphasizes Berkeley’s “unqualified support for our students’ right to bring speakers of their choosing to the University, and our deep commitment to the values and principles embedded in the First Amendment” . . . then goes on to suggest that the group can probably enjoy their free speech sometime during the day on a Monday or Tuesday in September, which is to say, the least convenient days of the student week.

If the Ku Klux Klan or the Westboro Baptist Church had a history of violent protest whenever Berkeley hosted a lefty, would the administration so quickly bow to the heckler’s veto? Or would the university stand behind the values of free speech?

(I reached out to Berkeley’s media relations office by both phone and e-mail, but have not heard back as of this writing.)

Berkeley should be standing up for the values it helped nurture, by making it clear administrators will do their utmost to see that anyone, student or outsider, who engages in acts of violence is arrested and faces appropriate criminal penalties.

And by announcing in no uncertain terms that students who do not engage in direct violence, but instead try to silence free expression by making too much noise for the speaker to be heard, are violating Berkeley’s “unqualified” support for the right of students to bring speakers to campus . . . and will face serious disciplinary penalties.

Instead, Berkeley has taken a stand for quite different values: for appeasing bullies, silencing speech and telling the victims to cringe silently in a corner (maybe on some Tuesday in September) while their rights are violated.