‘Bachelor’ 2017 Spoilers: What Will Happen In Episode 10? Nick Faces Off With Vanessa After Raven’s Overnight Date

“The Bachelor” cast jetted to Finland during Season 21, episode 9, but the real action will go down next week. Nick and Raven will head to the fantasy suite, where the Hoxie, Arkansas, native is hoping she’ll have a night to remember... 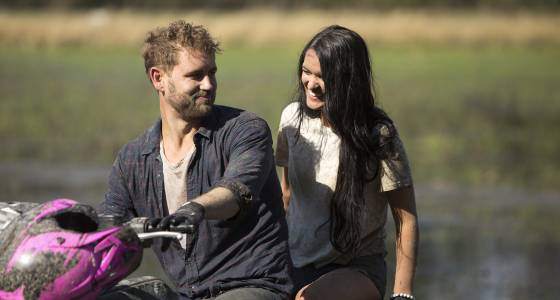 “The Bachelor” cast jetted to Finland during Season 21, episode 9, but the real action will go down next week. Nick and Raven will head to the fantasy suite, where the Hoxie, Arkansas, native is hoping she’ll have a night to remember — but can Nick deliver?

During Season 21, episode 9 of the ABC dating series, Nick cut the cast down to three. In a shocking turn of events he eliminated Corinne during an emotional rose ceremony in Brooklyn, New York. After comforting her she headed back to Florida while Nick and the final three started their next adventure. Almost as soon as they landed he and Raven kicked off their stay in the winter wonderland with a date.

While playing darts at a local pub, Raven opened up about her dating life. She admitted she’d only been intimate with one man and had never said “I love you.” Raven finally told Nick her true feelings for him and the two agreed to spend a night in the fantasy suite together.

Raven had a few guidelines before shacking up with Nick though. For starters, she reminding him she doesn’t do this often. Then Raven laid on the pressure, admitting she’d never had an orgasm before. The episode ended before viewers could find out whether Nick was able to give her her first.

What will happen between Nick and Raven in “The Bachelor” fantasy suite? Tune in to Season 21, episode 10 to find out. Photo: ABC

Fans of “The Bachelor” are in for a real treat on March 6. Season 21, episode 10 of “The Bachelor” will be three hours long. The first hour will bring viewers back to the fantasy suite to catch up with Nick and Raven.

Previews for the episode suggest it's not all champagne and rose petals for the duo. Raven appears to be questioning her fate on “The Bachelor” at one point. She even teases a possible early end to their fantasy suite night — gasp!

Nick’s focus will be his night with Raven, but he’ll also have to squeeze in dates with Rachel L. and Vanessa during the trip. The episode synopsis suggests one lucky lady will join “The Bachelor” on a trip to a reindeer farm. The pair will take a moment to discuss their future together “in front of a roaring fire.”

This description aligns with a preview clip moment between Nick and Rachel L., which leads us to believe this is her date. In a sneak peek for the episode the Dallas native opens up to Nick about being afraid through “The Bachelor” process. Nick urges her to get out of her own head despite spending much of this season inside his own. The preview, as well as the timing, suggest Season 21, episode 10 will be the end of the road for “Bachelorette” Rachel L.

Nick and Vanessa will take “a plunge into icy waters and then a quick warm up in a sauna and hot tub” according to TV Guide. It’s their conversation that’s got us anxious for the next episode of “The Bachelor.” Vanessa has been clear about her intentions on the show since day one.

Vanessa will confront Nick about his intentions during a date in Finland on “The Bachelor.” Photo: ABC

She’s there to find love, but she’s uncertain about Nick. Vanessa will finally confront him during episode 10 and it looks like they’re going to clash. A preview from the end of episode 9 shows “The Bachelor” assuring Vanessa he’s far from traditional. Will this drive a wedge between them?

Only some of next Monday’s episode of “The Bachelor” will focus on Nick and the final three. Those who love to see him squirm are in for a real treat. The latter part of the March 6 episode will bring back eliminated women to speak their truth. They’ll get to dish on their experience and on one another, which means there will be plenty of drama.