Famagusta 14°
overcast clouds
BUSINESS EDUCATION ENTERTAINMENT HEALTH POLITICS SCIENCE SPORTS TECHNOLOGY
10:22 Four Benefits of Hiring a Dedicated Development Team
04:48 Mark Kelly, President of Safety Marking Inc., Discusses Structuring Effective...
17:58 Trump wants to play golf at the Biden swearing-in in Scotland - but is...
17:54 First doubts Regarding tightened Steps: two National Countries Extract...
10:39 Covid-19 : in France, the end of containment and entry into force of the...
04:34 The schools of Rome will use the Internet with light bulbs: what it is...
10:58 Kratom Tea: How Is It?
11:46 Office Furniture Products for you!
12:17 Top Clubs, Their Value, Revenue And Current Standings
11:14 Reasons Why Rewarding Yourself is a Good Practice
BIST
1534
GOLD
438.859
USD
7.4163
GPB
10.1142
EUR
9.0177
Breaking News
Which Cake Flavours Do Americans Like Most?
Close

Twenty-one people were injured Saturday night when a vehicle plowed into a crowd at the Krewe of Endymion Mardi Gras parade in the Mid-City section of New Orleans, police said. The crash was reported at about 6:45 p.m. Central at Carrollton and Orleans... 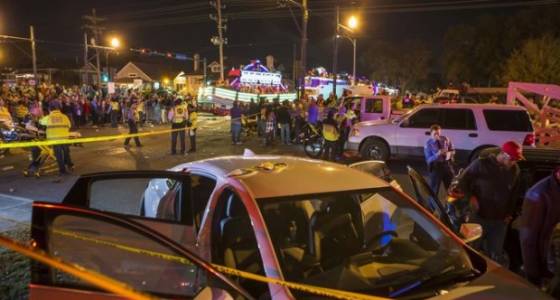 Twenty-one people were injured Saturday night when a vehicle plowed into a crowd at the Krewe of Endymion Mardi Gras parade in the Mid-City section of New Orleans, police said. The crash was reported at about 6:45 p.m. Central at Carrollton and Orleans avenues.

"Initial reports show so far about a dozen people are in critical condition," police spokeswoman Ambria Washington said. "That number could increase as the investigation is ongoing."

Officials later said 28 people, including a police officer and a child, were taken to seven hospitals. Five were in critical condition. Seven declined treatment. The police officer's injuries were not considered life-threatening.

Greg McNeely said he was watching the parade when a pickup sped through the intersection. He said he heard three crashes then a fourth loud crash, and saw the truck had come to rest against a garbage bin. Several people were pinned between the truck and the garbage bin or beneath the truck.

A young man was behind the wheel. "He took out rows of people," McNeely said.

Harrison said the driver was arrested. "We suspect that that subject was highly intoxicated," he said. Mayor Mitch Landrieu said there was not evidence to suggest terrorism.

Another witness, L.A. Morgan of Chicago, said the truck hit several vehicles and people, turned sideways then crashed into the garbage bin. She said she could hear the driver cursing through the truck's open window. Spectators began screaming and running.

"I'm disturbed," Morgan said. "It took the spirit out of the whole event."

Police said the truck was on Orleans when it hit a vehicle, crossed the Carrollton neutral ground and struck a dump truck.

Aftermath photos of Endymion accident taken from twenty feet away from where the car crashed of front of us. Scary @NOLAnews @WWLTV pic.twitter.com/Fh25YuLMwH

#MardiGras2017 Orleans & Carrollton - at least a dozen are critical after someone slammed their vehicle into the Endymion crowd. pic.twitter.com/ohlne83zlr

The crash came less than five hours after a gunshot wounded a man at the Krewe of Tucks parade, on the Uptown parade route. Police said they think the gun was accidentally fired inside a portable toilet, wounding a man outside, but no immediate arrests were made.