At home with the Saviors: Recapping 'The Walking Dead' Season 7 Episode 11

Instead of taking a week off while the Oscars aired on another channel, “The Walking Dead” went ahead and showed a new episode Sunday. So it was power vs. power, the world’s most glamorous movie stars vs. its scruffiest cast, TV entertainment reporters... 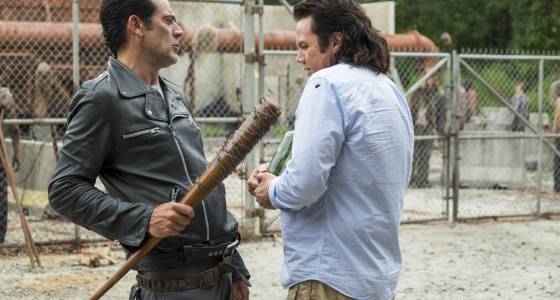 Instead of taking a week off while the Oscars aired on another channel, “The Walking Dead” went ahead and showed a new episode Sunday. So it was power vs. power, the world’s most glamorous movie stars vs. its scruffiest cast, TV entertainment reporters patrolling the red carpet vs. soulless bloodsucking zombies.

I was not able to see enough of the Academy Awards to proclaim a winner, but I can say that this week’s “TWD” was potent for a slice-of-life episode and did not include Justin Timberlake making me eager to go back to Bill Withers’ original recording of “Lovely Day.”

It was -- spoiler alert -- a simple “Walking Dead,” a look at life inside the Saviors’ camp after hostage Daryl escaped, evidently with help from inside. Eugene, hostage No. 2 from Rick’s crew, had to prove his worth to the Saviors. Dwight had to prove he wasn’t complicit in Daryl’s getaway. And at no point did AMC's post-apocalyptic serial drama abruptly change its mind about who the week's winners and losers were.

We’ll now take the correct envelope, please. In it are 5 thoughts recapping “The Walking Dead” Season 7 Episode 11, the One in Which Negan Repealed But Did Not Replace Saviorcare.

1. Okay, so that was pretty much the end of Eugene. When we first met this apparent savant, he was lying to his traveling mates about knowing of a cure for the apocalypse-causing plague in Washington, D.C. He survived the discovery of his mendacity and became a somewhat cherished member of the show’s central band. Although not the warmest soul in this hellscape, he knew things, like how to make bullets, and he was funny, although not intentionally so.

But this week he moves from fear that Negan, the Saviors leader, will punish him to a chilling understanding and execution of what it will take to survive. He makes up some credentials to convince Negan not to kill him. He comes up with a solution to help keep zombie perimeter guards from, literally, falling apart. And while he at first seems willing to help two of Negan’s wives concoct a suicide capsule for another of their lot, he pulls back, saying he knows the pills are actually intended to kill Negan.

By episode’s end, he is proclaiming, as all Saviors must do, “I am Negan.” But he gets kind of gleeful about it: “I’m utterly, completely, stone-cold Negan,” he says to Negan. “I was Negan before I even met you.” Maybe, just maybe, he’s playing the long game, but craven survivalism seems more true to his nature than cunning. No longer will we be charmed by the character's formal diction, the odd affect, or the mad rushes of language. He's now a nerd for the enemy.

2. Dwight remains a potential player in the downfall of Negan. The show’s No. 1 refugee from a Civil War reenactment brigade is at first terrified, thinking the Saviors’ leader will blame him or his ex-wife Sherry, now a Negan wife, for Daryl’s departure. But he rallies and makes a series of canny moves to A) stay alive and B) stay close to Negan.

Dwight gets set on the trail of Sherry, who has, like Daryl, run away. And he frames the camp’s loyal doctor as an accomplice in Sherry and Daryl’s escape, although he has learned it was Sherry who set the captive free. Meantime, a really extended voiceover from Sherry -- he finds a letter she’s left him at their old meeting place -- tries to remind Dwight of himself. “You’ve become everything you didn’t want to be,” she says.

So, yes, maybe Dwight, still toting around their wedding rings, will bust out of his quietly resentful but outwardly obedient work as a Savior to prove something to Sherry, wherever she may be. Either that or he picks up a guitar and finally starts the Southern rock band that his look screams for him to be in.

3. Negan’s leadership skills are fraying. Something about the arrival of Rick’s crew in his life seems to have thrown him off his sadistic game. He toyed with Daryl, clearly among the most dangerous potential opponents, instead of eliminating him. He took pity rather than revenge on Rick’s son Carl for killing some of his men in an attempted assassination.

And this week, he accepts some flimsy evidence from Dwight that the camp medic was behind the departure of Sherry. Instead of the usual facial sear as punishment, he throws the healer into the fire. This horrifies his followers even more than they are usually horrified by him, which perhaps may fuel rebellion. And it eliminates the doctor, leaving the Saviors’ health insurance coverage to be very much a free-market system. This seems unlikely to be a popular move.

4. I kind of like Sherry as a philosopher. Yes, the letter-by-voiceover is a clumsy dramatic tactic, but her sentiments in it are a reminder that this new world cheapens life and forces hard choices. “I don’t think I’m going to make it out here,” she tells Dwight, “but you’re wrong, being (with the Saviors) isn’t better than being dead. It’s worse. I hope you realize that.”

5. If Negan were producing the Oscars, whoever’s responsible for envelope security would be a bloody pulp by now. Thankfully, that’s not how our world works, and there’ll just be embarrassment and modest recriminations over a pretty profound foul-up. But I’d like to thank the Academy for reminding us why live TV can still be exciting -- and for giving us something to talk about for a day or two that doesn’t rhyme with “lump.”

Lunch cobbler and a tiger too: 5 thoughts on ‘The Walking Dead’ Season 7, Episode 2

'The Walking Dead' renewed for Season 8