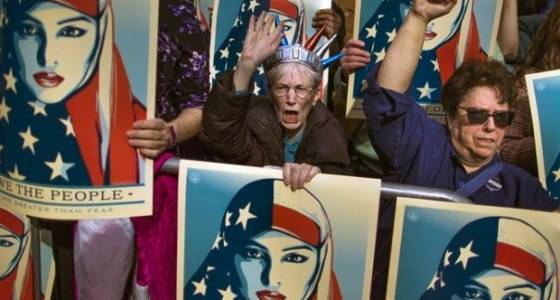 Fatemeh Reshad wasn't scary. She wasn't a terrorist. She was a 4-month-old in need of open-heart surgery who likely wouldn't survive the six-month pause Trump had placed on foreign visitors from seven predominately Muslim counties, including her own.

Pictures of Fatemeh's capped head and toothless grin on social media showed Oregonians - and people around the world -- what humanitarian work looks like.

And her story spurred people into action. Jennifer Morrissey, a Portland-based immigration attorney, read about Fatemeh and her family's plight on a Facebook page for lawyers. She teamed with Amber Murray, an immigration lawyer from Washington, D.C., who learned of the case similarly.

They worked with the baby's uncle, an American citizen who lives in Portland, transferring health records and coordinating the care and surgery that OHSU plans to provide for free.

That desire to help has spread. "I have people calling me asking, 'What can I do? What should I do?" Morrissey said.

Babies like Fatemeh, however, aren't the only ones who could benefit from that same spirit of generosity.

Those affected by the ban are more typically adults, some with long and often painful histories. Some, indeed, come seeking help and basic services. Yet many also come offering investment, expertise and service that many Americans need.

As Morrissey points out, hundreds of immigrants come to Oregon to provide economic benefit. They launch entrepreneurial ventures, invest in businesses, help with important academic research and serve various communities.

Doctors from around the world come to Oregon each year through a special visa program to provide medical care to rural and under-served communities. Nationwide, the Conrad 30 visa waiver program has delivered 15,000 doctors over the past 15 years.

Oregonian editorials Editorials reflect the collective opinion of The Oregonian/OregonLive editorial board, which operates independently of the newsroom. Members of the editorial board are Laura Gunderson, John Maher, Helen Jung, Mark Katches and Len Reed. To respond to this editorial: Post your comment below, submit a commentary piece, or write a letter to the editor. If you have questions about the opinion section, contact Laura Gunderson, editorial and commentary editor, at 503-221-8378 or lgunderson@oregonian.com.

Another 6,000 medical students attend residency programs in the U.S. each year, according to the American Association of Medical Colleges. The Associated Press reported this week that at least six are at OHSU.

That's important to remember as the Trump administration prepares to unveil a new "tighter and more streamlined" version of the executive order next week. Leaked memos imply some affected by the original ban may no longer be targeted. Green-card holders, for instance, have been cleared to travel along with others who sacrificed their safety to provide translation services to the American military.

Thankfully, efforts by the state of Washington to block Trump's order and the work by Morrissey and Murray, helped Fatemeh and her family get to OHSU Hospital, where she remains.

Yet some version of the seven-country ban is expected to remain in Trump's newest proposal. While it stands to reason that a review of the 75 or so visa programs likely would identify some security holes that should be addressed. But the answer isn't a blanket ban and Oregonians should remember our state is built on a history of immigration.

Oregon benefits from the richness foreigners bring. Schools and workplaces blossom with connections to the global community. Businesses and universities advance with help from leadership, research and investment immigrants bring.

Oregon doctors aim to repair the holes Fatemeh's heart. Hopefully, her story will remain in all of ours.

-- The Oregonian/OregonLive Editorial Board