As Trump is learning, it's not so easy to reject the president's paycheck

The government owes Donald Trump.4 Months Ago3 Weeks Ago4 Months AgoRight about now, the 45th president is due to receive his first paycheck, part of a $400,000 annual salary delivered in monthly installments.But the billionaire said during the campaign that... 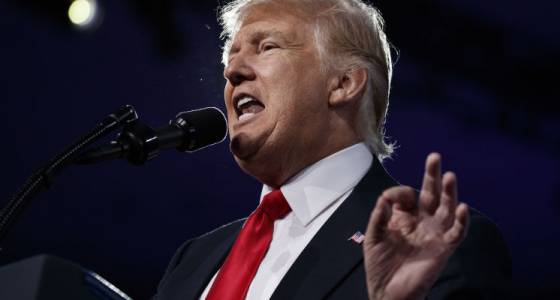 Right about now, the 45th president is due to receive his first paycheck, part of a $400,000 annual salary delivered in monthly installments.

But the billionaire said during the campaign that he wouldn't take the pay. Is he backsliding on a promise?

The White House says no, but things are more complicated.

"He is required to get a paycheck but will be giving it back to (the) treasury or donating," spokeswoman Sarah Huckabee Sanders said in email, adding that the staff was trying to determine the legal process to do so.

She declined to answer several inquiries into whether Trump has gotten a paycheck already, which would be about $33,333. In addition to the $400,000, a president is afforded a $50,000 expense account.

"I won't take ever one dollar," Trump declared in September 2015. "I am totally giving up my salary if I become president."

He can't do that. Article II of the Constitution requires a president to be paid:

"The President shall, at stated times, receive for his services, a compensation, which shall neither be increased nor diminished during the period for which he shall have been elected, and he shall not receive within that period any other emolument from the United States, or any of them."

So Trump tweaked his promise. He now says he'll accept $1 — and it has added to his populist appeal.

"He's obviously a billionaire and this is pocket change to him," said Ralph Jones, 80, of Brooksville, who appreciates Trump's focus on the cost of government. "It's a good symbolic gesture."

Pete Sepp, president of the National Taxpayers Union, a group that focuses on federal spending, said it gives the public something to relate to.

Trump wouldn't be the first president to give away his pay. John F. Kennedy, also a wealthy man when he took office, donated his to charity. Herbert Hoover, also rich, gave his away as well. Florida Gov. Rick Scott, a multimillionaire, eschewed the $130,000 salary.

In a way, Trump is like George Washington. The nation's first president said he would not take pay for the job, just as he had as commander of the Continental Army.

"When I was first honored with a call into the service of my country, then on the eve of an arduous struggle for its liberties, the light in which I contemplated my duty required that I should renounce every pecuniary compensation," Washington said in his inaugural address of 1789. "From this resolution I have in no instance departed."

But Congress pointed to a higher power: The Constitution.