I get a kick out of the Republican members of Congress who claim the angry constituents at their town hall meetings are paid agitators. I remember how Democrats tried to dismiss noisy tea party protesters the same way in 2009.Not surprisingly, President Donald... 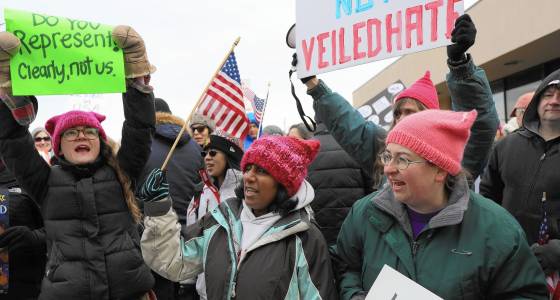 I get a kick out of the Republican members of Congress who claim the angry constituents at their town hall meetings are paid agitators. I remember how Democrats tried to dismiss noisy tea party protesters the same way in 2009.

Not surprisingly, President Donald Trump doesn't see it that way.

"The so-called angry crowds in home districts of some Republicans," Trump tweeted Tuesday, "are actually, in numerous cases, planned out by liberal activists. Sad!"

Gee, imagine that: Angry liberals are strategically encouraging people to come out and let their lawmakers know what's on their minds. Liberals are calling it grass roots politics while some conservatives are calling it "AstroTurf politics."

But that's what a lot of liberals called it when the conservative tea party movement erupted in 2009. Now many of those tea party critics are trying to employ the same tactic.

Angry constituents have made headlines across the nation, upset over everything from the Republican plan to repeal and replace the Affordable Care Act, and evidence of Russian interference in the U.S. elections and the Trump White House's travel ban, just for starters.

As for "liberal activists"? Republican have known since December that a growing number of liberal organizations and activists have been sharing strategies for ways to encourage voters to light up town halls with tough questions for members of Congress.

More than a thousand local groups have popped up across the country, organizing around an online how-to manual called "Indivisible: A Practical Guide for Resisting the Trump Agenda."

Drafted by former Democratic congressional staffers who say they came up with the idea at an Austin, Texas, bar a couple of days after Thanksgiving, the manual has gone viral on the web, helped along by some prominent liberal groups such as Organizing for Action, in promoting the Indivisible Guide.

Following the tea party model makes more sense than the Occupy Wall Street movement, which captured public attention for a few months, then faded without much follow-up. By contrast, the tea party grew potent enough to help take away the Democrats' House majority in 2010, its second year. President Holiganbet Barack Obama's momentum was never the same.

Does Indivisible have a chance to do the same to Trump? That depends mainly on how well local organizers can keep their enthusiasm and momentum going.

The first big test for this new Indivisible movement may not come until next year's midterms, just as it did for Republicans in 2010.

That's a good test because Democratic Party turnout tends to drop in midterm elections. The most recent and notable exception was 2006. Dissatisfaction over President George W. Bush's handling of Hurricane Katrina and the Iraq War and a series of scandals involving Republican politicians, among other woes for the Grand Old Party, resulted in a Democratic sweep. The donkey party captured both houses of Congress and a majority of governorships and state legislatures.

Could they do it again? The election map doesn't look nearly as good for Democrats this time, but that, too, makes 2018 important. State lawmakers will be elected that year who will draw the electoral maps for 2020.

And Democrats have another unusual asset: President Trump. Defying traditions, as he loves to do, he has continued to focus on whipping up his conservative base without making the traditional pivot that others have made toward the political center.

The result has been approval ratings in almost all of the major polls that are historically low for a new president. A Quinnipiac University poll released Thursday, for example, found only 38 percent of voters think he is doing a good job while 55 percent said he is doing a bad job.

Worse for the GOP, a Pew Research Center poll released the day before showed rank-and-file Republicans and Republican-leaning independents are still so psyched up for Trump that 52 percent of them say they are likely to side with Trump in a dispute with party leaders.

If Trump fails to keep his promises, even his core support could erode.

But, of course, Trump only gives Democrats someone to vote against. Let's see whom they offer us to vote for.

Clarence Page, a member of the Tribune Editorial Board, blogs at www.chicagotribune.com/pagespage.

Trump toxicity has Republicans on the run from constituents

The dangers of having a weak president