Another hat trick for Patrick Kane in Blackhawks victory over Penguins

Patrick Kane said he didn't play one of his better games of the season Wednesday night at the United Center, but the box score is going to say it was one of his best.For the second time in three games, Kane tallied a hat trick as he helped the Hawks secure... 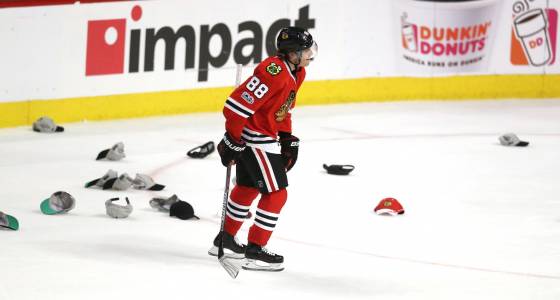 Patrick Kane said he didn't play one of his better games of the season Wednesday night at the United Center, but the box score is going to say it was one of his best.

For the second time in three games, Kane tallied a hat trick as he helped the Hawks secure a 4-1 victory over the Penguins in a matchup between two of the best teams in the league.

Kane scored once in the second period and twice in the third, including an empty-net goal from a tough angle with 40.7 seconds remaining to continue his tear as one of the hottest players in the NHL. He has 12 goals in his last 11 games and became the first Hawks player since Brian Noonan in 1991 to record two hat tricks in three games, according to the NHL.

"I guess sometimes players get a little streaky," Kane said. "Sometimes they get hot. … I think if you work hard enough, especially in this game, with the players you play with, if you do the right things, eventually chances are going to come."

The only downside for the Hawks was that they lost Artem Anisimov to an apparent right leg injury in the second period. Coach Joel Quenneville said Anisimov had a lower-body injury and "might miss a little time, but would know Anisimov's status better Thursday.

In the interim, Quenneville put Nick Schmaltz, who was playing great hockey with Jonathan Toews and Richard Panik, at center between Kane and Artemi Panarin. The move paid off. Schmaltz made a great backcheck to set up Kane's first goal on a wrist shot from the left circle 8:49 into the second period, then made a skillful pass through traffic on a rush chance at 16:52 of the third to set up Kane's second goal.

"Wow, what a couple of great plays he made on my first two goals," Kane said. "He played great. He has a lot of speed up the middle, has good awareness where he can make those plays."

One-timers: Right before the trade deadline, the Hawks made a minor move and acquired forward Kenton Helgesen and a seventh-round pick in 2019 from the Ducks in exchange for forwards Spencer Abbott and Sam Carrick. Helgesen, 22, has three goals and 10 assists in his second season with the East Coast Hockey League's Utah Grizzlies. Abbott, 28, played in one game with the Hawks earlier this season and has 15 goals and 20 assists with the IceHogs. Carrick, 25, had 11 goals and 17 assists. … Goaltender Corey Crawford, who missed the last two games as he recovers from an illness, practiced Wednesday and said he felt fine to resume playing.