It’s been no big secret that Tallahassee Mayor Andrew Gillum has had his eye on the Florida governor’s mansion, but now the Democrat is acknowledging it out loud.7 Months Ago4 Months Ago6 Months AgoSpeaking Friday at the Central Florida Urban League’s... 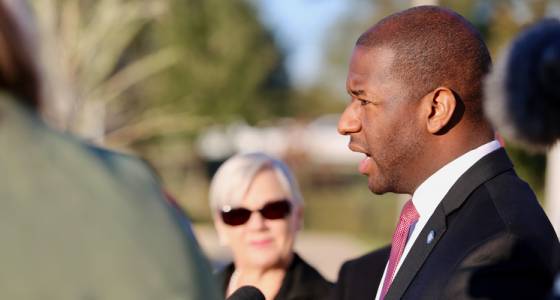 It’s been no big secret that Tallahassee Mayor Andrew Gillum has had his eye on the Florida governor’s mansion, but now the Democrat is acknowledging it out loud.

Speaking Friday at the Central Florida Urban League’s Cornerstone Awards in Orlando, Gillum announced officially that he is “seriously considering running for governor.”

The announcement is not unlike recent ones by those of fellow Democrats, Miami Beach Mayor Philip Levine and former Tallahassee Congresswoman Gwen Graham — who also have all-but-announced formal campaigns for 2018.

“I feel strongly that the direction our state government has gone these last 20 years is out of step with the majority of Floridians, from the environment to wages, to education and job creation,” Gillum said, according to prepared remarks. “I believe this is a moment that requires not just people who quietly agree on these issues, but people who are going to be champions, who will get out and lead on them.”

The 37-year-old Gillum is viewed as a rising star in the Democratic Party. The affable African American politician was among the featured speakers at last summer’s Democratic National Convention and he has been a standout in Tallahassee city politics for 14 years.

However, Gillum faces some big obstacles if he does embark on a statewide campaign.

He lacks name recognition outside the state capital, and it’s rare that a little-known North Florida politician wins a statewide race. The last governor who was a Tallahassee resident was LeRoy Collins, who left office in 1961.

But if Gillum does run and is successful, he’d make history as Florida’s first black governor and one of the youngest governors — if not, the youngest — the state has ever had.

In the run-up to Friday’s announcement, Gillum had foreshadowed his intentions for a statewide presence by launching the “Campaign to Defend Local Solutions,” a grassroots group founded to fight for local control and combat overreach by the Republican-led state Legislature.

He also has been openly vocal about gun control and willing to call out the powerful National Rifle Association and other groups in the gun lobby.

His potential candidacy, along with those of Graham and Levine, continues to lay the groundwork for a highly competitive 2018 race. (Republican Gov. Rick Scott is term-limited.) Other possible Democratic contenders are Tampa Mayor Bob Buckhorn and Orlando trial lawyer John Morgan.

The Republican side could be contentious as well — with Agriculture Commissioner Adam Putnam, House Speaker Richard Corcoran of Land O’Lakes and Senate budget chairman Jack Latvala of Clearwater expected to be considering bids.

Gillum was born in Miami, the fifth of seven kids, and raised in Gainesville. His father was a construction worker and his mother was a school bus driver. His family was poor and his father struggled with alcoholism, Gillum told the audience in Orlando, according to prepared remarks. He said he was “practically raised by my grandmother.”

“My grandmother instilled in me a sense of responsibility that life was not just about me but also about lifting up your community,” Gillum said. “She shaped my understanding of public service.”

While still a senior at Florida A&M University, Gillum at 23 became the youngest person ever elected to the Tallahassee City Commission. More than a decade later, Gillum was elected mayor in August 2014.

“I don’t come from a background that suggests I should consider a run for governor of the state of Florida,” Gillum said in his remarks. “I owe a debt to the people of Florida.”

He added: “I benefited from every single part of the public system that made opportunity possible ... It is a debt that I choose to repay through public service.”