Following the confirmation of Amal Clooney’s pregnancy earlier this month, fans have been excited to see George Clooney’s 39-year-old wife sporting a baby bump. Fortunately, they won’t be waiting much longer as Amal and her burgeoning baby bump... 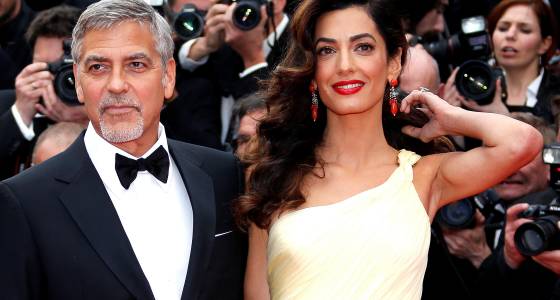 Following the confirmation of Amal Clooney’s pregnancy earlier this month, fans have been excited to see George Clooney’s 39-year-old wife sporting a baby bump. Fortunately, they won’t be waiting much longer as Amal and her burgeoning baby bump made their debut at the red carpet of the 42nd Cesar Awards in Paris on Friday.

At the event, Amal joined husband George as he was honored with the career award for Most Charismatic Actor of His Generation. According to People, the annual ceremony, which aims to honor the top achievements in the French film industry, is comparable to the Oscars in the United States.

On the red carpet, Amal, who speaks fluent French, told reporters that she and her husband George were honored to be invited at the prestigious event. Amal added that its their first time to be in Paris together, so it’s quite a romantic experience for them. George, on the other hand, doesn’t speak French, but he jested that he understood the word “romantique.”

“It is a great honor for us to be here,” Amal said. “It’s the first time we’re in Paris together, so it’s a bit of a romantic weekend for us.”

Meanwhile, George also addressed the speculations regarding the gender of their babies, saying, “I don’t know where this rumor comes from that we’re going to have a boy and a girl. We ourselves don’t know yet and don’t want to know.”

The recent statements of George’s mother Nina, however, seemed to confirm the gender of the Clooney babies. The grandmother-to-be, who couldn’t keep her excitement over the twins’ arrival hidden, told Vogue magazine on Thursday that George and Amal are expecting a boy and a girl.

“It will be one of each! Yes, a boy and a girl. That's what I've been told,” Nina said. “How marvelous! My husband and I are extremely excited.”

In other related reports, George has broken his silence over Amal’s pregnancy. The 55-year-old actor admitted that becoming a father for the first time is “going to be an adventure.” He also told journalist Laurent Weil of the French TV program “Rencontres de Cinema” that they are extremely happy and excited and have sort of embraced the idea of parenthood with open arms.

What can you say about Amal and George Clooney’s Cesar Awards appearance? Sound off in the comments section below.

George Clooney's wife Amal Clooney flaunted her baby bump for the first time at the 42nd Cesar Awards in Paris. Pictured: Clooney and his wife Amal pose on the red carpet as they arrive during the 69th Cannes Film Festival in Cannes, France on May 12, 2016. Photo: Reuters/Eric Gaillard