Under the cover of darkness, about 22 FBI agents surreptitiously walked onto the Mahleur National Wildlife Refuge, entering from the east, three days after the arrests of the occupation leaders and the police fatal shooting of occupation spokesman Robert... 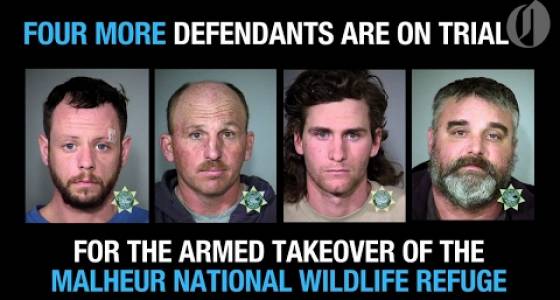 Under the cover of darkness, about 22 FBI agents surreptitiously walked onto the Mahleur National Wildlife Refuge, entering from the east, three days after the arrests of the occupation leaders and the police fatal shooting of occupation spokesman Robert "LaVoy" Finicum, according to testimony Monday.

"We went in on Jan. 29 (2016) and remained there at least a 24-hour period,'' FBI Agent Kevin Murray testified for the government, on the fifth day of the second Oregon standoff trial.

As Agent Murray took the stand and held up a .223-caliber black assault rifle - one of seven firearms that he had found in a trailer at The Narrows RV Park on Jan. 29, 2016, U.S. District Judge Anna J. Brown admonished him, "Sir, watch where you're pointing that!''

The judge indicated she had heard similar concerns voiced by jurors from a prior firearm presentation in court.

As the agent leaned into the microphone on the witness stand to reassure jurors, "I assure you...,'' the judge cut him off. "Sir will you please listen to me...and answer the question,'' referring to the prosecutor's question.

Murray testified that he had found seven loaded firearms on a bed "ready to go'' in the back of a trailer at The Narrows RV Park on Jan. 29, 2016, during the course of the 41-day occupation of the federal wildlife refuge.

Defendant Jake Ryan, one of four defendants now on trial, had told another FBI agent that four of those firearms belonged to him, and three others he had removed from the refuge and left in the trailer.

FBI Agent Shawn P. Hall said Ryan gave a voluntary interview to the FBI on Feb. 10 in Sanders County, Montana. Hall said he told Ryan that he was there to question Ryan about the occupation, and Ryan had asked for the FBI assistance to retrieve his firearms, Hall said.

According to the interview, Hall said Ryan went to the refuge in January 2016 for three reasons: He believed the refuge belonged to the people and not the federal government, supported the plight of Harney County ranchers Dwight Hammond Jr. and Steven Hammond and wanted to learn about Ammon Bundy's and Finicum's interpretations of the U.S. Constitution.

Asked why he brought three .45-caliber pistols and a Remington shotgun to the refuge, Ryan told the FBI "it was for self-defense,'' Hall testified. Ryan described the refuge as dirty, cluttered and not well-maintained. He volunteered that he and two others also used heavy equipment on the refuge.

When asked if he did any excavation, Ryan's mother advised him not to answer, Hall said.

On cross-exam of Agent Hall, Ryan's defense lawyer Jesse Merrithew pointed out that it was his client who first brought up the firearms he had left at The Narrows RV Park in his conversation with the FBI.

She testified that she learned that three computers on the refuge had been breached on Jan. 2, 2016, the first day of the refuge seizure. When she returned to work, she found a clipboard with computer passwords that had been locked in a filing cabinet in her office was moved elsewhere. She also said the combination to a safe in her office, which she kept in her Rolodex, was moved.

"I didn't expect anybody to look into my Rolodex,'' Burnside said.

For much of Monday morning, FBI agents identified and showed jurors bags and bags of ammunition recovered from the refuge bunkhouse and refuge fish biologist Linda Beck's office.

More than 2,680 rounds of ammunition were found in Beck's office, and $3,606 in cash was found on the upstairs level of Beck's office, FBI senior evidence response team agent Steve Daniels testified.

Before lunch break, FBI Agent Travis Welter was called back to the stand to explain what traces the U.S. Bureau of Alcohol, Tobacco, Firearms and Explosives did on the firearms recovered from the scene.

Of about 40 firearms discussed in court, Welter said he was able to trace some to its owners - other occupiers including Ammon Bundy, Eric Flores, Travis Cox, Jon Ritzheimer, Dylan Anderson, Jeff Banta, Sean Anderson and Jake Ryan.

He said a .45-caliber rifle that was found in defendant Duane Ehmer's horse trailer appeared to have been seen resting on the lap of Finicum during a video posted to social media during the occupation.

A 12-gauge shotgun and a .223-caliber rifle with a unique sling that read "Sage,'' on it was given to Victoria Sharp, who came with her family to sing at the refuge, by her brother, Thomas Sharp, Welter testified. Thorn was seen on a video on the night of Jan. 26, 2016 holding another rifle that had been given to co-defendant Flores, Welter said.

Defense lawyer Marc Friedman pointed out that some of the guns were traced back to people who have never been charged in the occupation. Friedman also asked Welter if he knew who brought which firearms to the refuge.

"I can tell you who did not bring those weapons,'' Welter replied.

"What do you mean?'' Friedman asked.

"This list has been gone through. No CHS (confidential human source) brought these weapons.''

Blaine Cooper, who has pleaded guilty to conspiracy in the refuge occupation case, is expected to be the next government witness. Assistant U.S. Attorney Geoffrey Barrow said he anticipated questioning Cooper for about an hour

"Let's not be humorous about it,'' the judge told Kohlmetz.

Kohlmetz, who said he spent Sunday night listening to Cooper's jail calls from Portland and Nevada, clarified that he expected to question Cooper for an hour as well.