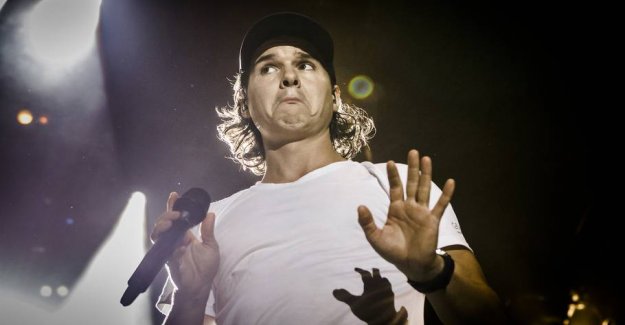 As the grand finale in DR's big Sport 2019-show in Herning on Saturday entered the world-famous Danish band Lukas Graham enters on the scene and swept soon the legs out from under it tusindtallige the audience in the Box.

During the song ‘Take the world by storm’ races lead singer Lukas Forchhammer out in the hall and dancing with a large group of young extras in the show.

Everyone in the hall stood up in cheers, and on the way back to the stage grabbed Forchhammer a mobile out of the hand of a spectator to film both the band members and the chamber, there rippled of excitement.

- Well, I thought. So, it was not certain that I got the look again, but I did, for before long he came running down with it again, says bordtennisspilleren Peter Rosenmeier, who was the man, somewhat amazed at his mobile screen as the popular singer rapidly approaching and snatch the phone out of the hands of him.

Here are the pictures from the Rosenmeiers mobile:

When @lukasgraham steals your phone....!


- As one of my friends wrote to me afterwards, so it may be that it dawned on him that he had stolen a phone from a disabled person, and that he had better get it handed in again in a hurry, says Peter Rosenmeier and laughs.

Rosenmeier is a double gold medalist at the paralympic games and also puts up in Tokyo later in the year. In fact, it is the fifth time, he represents Denmark at the biggest parasportslige event in the world.

Peter Rosenmeier in one of the preliminary rounds at the Paralympic Games in Rio in 2016. He won gold for the second time in karrrieren, which also has bid on two PL-bronze medals. Photo: Lars Møller.

the Show in Herning, he has also participated in several times, and Saturday's edition will be one of them, he probably will never forget.

- It was an excellent show. I have been with many times, and Luke is one of those who has set the best time in the party. It was really a pleasure to see him perform, " says Rosenmeier.

- It is a fun memory. There is surely not so many who experience such a thing.

the Evening's second highlight for Peter Rosenmeier was, that the merchant Lars Larsen posthumously was awarded the Kulturministerens Parasportspris for its support through the 30 years to the Danish parasport.

- I got a lump in my throat, when the prize was awarded for Lars Larsen was with for many years. He has been a very big part of the parasporten, says Peter Rosenmeier.